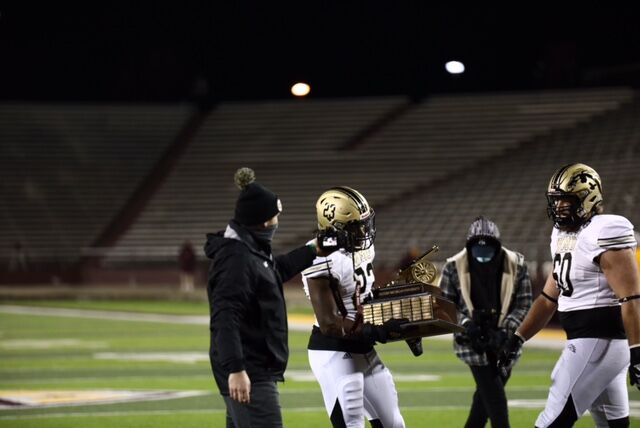 WMU linebacker Treshaun Hayward walks off the field after the game with the Victory Cannon in hand, the trophy annually given to the winner of the WMU-CMU rivalry football game. 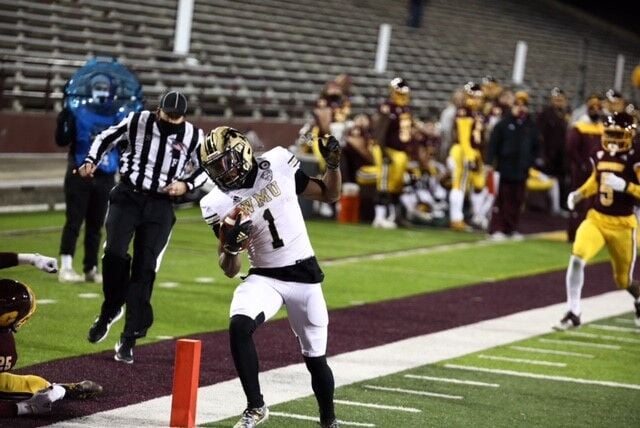 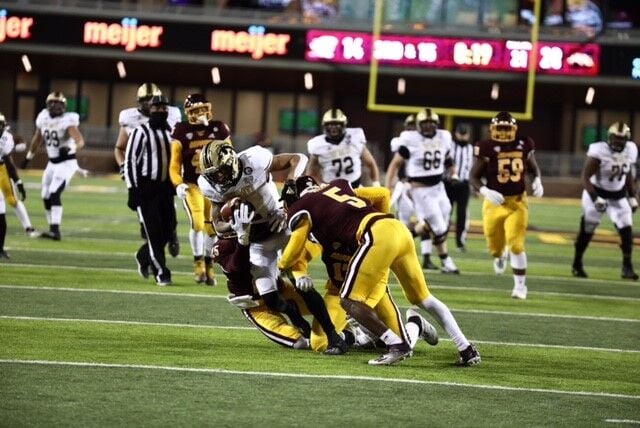 WMU football used a stretch of 38 unanswered points to claim a road win over rival Central Michigan in a 52-44 shootout on Wednesday night to move to 3-0 on the season and move atop the MAC West standings.

“It was exciting to just beat a good team that I really respect,” WMU football head coach Tim Lester said. “They play hard and they’re physical and that’s the best part about a win. Beating Central’s always good, but when you think they’re a good team, it makes it even sweeter and tells you you’re moving in the right direction.”

The Broncos settled into the game at about the midway point in the first quarter, but the start of the game couldn’t have been much worse for Lester’s team.

On the game’s third offensive play of the game, wide receiver Kalil Pimpleton lined up in the backfield and broke through the line on a handoff for a 65-yard touchdown run to give CMU a quick 7-0 lead.

The Broncos’ first offensive series didn’t go much better as quarterback Kaleb Eleby threw his first interception of the season on a third-and-long play trying to scramble out of the pocket and make an off-balance throw to tight end Brett Borske.

The ball landed in the hands of George Douglas at the WMU 24-yard line, where the Chippewas’ offense would take advantage of the field position. Running back Kobe Lewis found the endzone from a yard out on the ground after a Treshaun Hayward roughing the passer penalty to put CMU up 14-0.

In the early stages, it looked like the Broncos may be in for a long night and needed to find a way to settle into the game quickly. They did just that on their next offensive series with a nine-play, 70-yard drive that took just under four minutes off the clock that was capped with an Eleby four-yard touchdown run.

As it turned out, that drive was all it would take for the Broncos to settle in and start to pour it on their rival.

Lester said his team has an ability to stay calm in situations where things don’t go their way, as that was shown in this game.

“They stayed calm and they played,” Lester said. “We started bad, but then we calmed down. When you have an explosive team, all you need is a little momentum. The key is that we ran the ball and forced them to stop the run..”

WMU’s defense was able to turn it up a notch and the Broncos started to roll on offense for the rest of the half. With 5:11 to go in the first quarter, WMU tied the game at 14 apiece when Sean Tyler took the ball into the endzone on an outside zone play for a six-yard score as the Broncos began to establish the line of scrimmage on both sides of the ball.

With the score still knotted at 14-14, the Broncos struck again when Eleby found D’Wayne Eskridge on a slant on a run-pass-option play to give WMU its first lead of the game on the first play of the second quarter.

CMU’s offense could not keep up as defensive end Marshawn Kneeland and the Broncos front seven put pressure on the passing game, along with defensive coordinator Lou Esposito bringing several forms of blitzes.

With 7:03 to go in the half, Eleby connected with Jaylen Hall in the endzone for a 9-yard score to put the Broncos up 28-14. The two had several connections throughout the game, including a play late in the first quarter when Eleby found the redshirt junior on a 43-yard pass down the sideline.

“Kaleb’s definitely playing well beyond his years right now,” Lester said. “Still can get a lot better, but just proud of his moxie. The whole offense really just stayed calm.”

WMU would add a field goal at the very end of the first half to take a 31-14 going into the break.

The Broncos had 359 total yards of offense in the first half compared to CMU’s 137.

To start the second half, the Broncos wasted little time picking up right where they left off in the first. On WMU’s opening possession, Eleby connected with Eskirdge on another RPO play over the middle of the field as Eskirdge got by the last line of defense for a 72-yard score, his second of the night, to make it a 38-14 game.

Eskridge said the weapons the Broncos have on offense are what allow him to be successful in this offense.

“With the receivers we have, they open up things for me too because those guys on the other side are special with Jaylen Hall, Corey Crooms, Skyy Moore,” Eskridge said. “Really it’s just whoever wants to cloud one side, the other side’s gonna eat up.”

CMU’s offense was finally able to break out of its slump on its opening possession of the half when Pimpleton lined up in the wildcat formation on a 4th-and-11 play and found an opening off the right side for a 25-yard rushing touchdown. A successful two-point conversion trimmed the WMU lead to 38-22 with 10:50 left in the third.

Both offenses continued to go back-and-forth when Eleby again found Eskridge, this time for an 85-yard touchdown as the redshirt senior got behind CMU’s secondary for his third touchdown of the game.

But WMU’s defense allowed the Chippewas to hang around, when Lewis took a handoff and found an opening for a 69-yard score on the ground. A successful two-point conversion off a tipped pass made the score 45-30 Broncos with 9:35 left in the third.

From that point, both defenses finally settled down a bit as the score remained the same after the quick strikes from both teams heading into the fourth quarter.

The Broncos’ defense stepped up to give the offense good field position at the start of the fourth quarter. And as it was able to do all game, the WMU offense took full advantage.

On a third down play with just over 11 minutes to go in the game, Eleby found Hall on a post route in stride for a 43-yard connection on yet another big play, which defined the night for the Broncos’s offense, to make it 52-30 to put the game practically out of reach.

CMU did answer with a 10-play, 75-yard scoring drive capped up with a touchdown run from Pimpleton, his third of the game, to make the score 52-36 with 6:32 to play.

The Chippewas would score again late to make it 52-44 with about 2:30 to play as the WMU defense struggled to close out the game on a nice catch by Drayton Law, but it wasn’t enough as the Broncos held on for the eight-point victory to claim the Victory Cannon for the third straight season.

WMU finished with 628 yards of total offense for the night while the Chippewas gained 406 themselves in the high scoring affair.

Through the air, Eleby finished with 382 yards passing on 12-of-20 with five touchdowns and one interception. Eskridge led the Broncos in receiving with four receptions, 212 yards and the three touchdowns for an average of 53 yards per catch. Jaylen Hall hauled in four catches for 110 yards and two touchdowns as well.

La’Darius Jefferson led the way for the Broncos on the ground with 153 yards on 33 carries. Sean Tyler added 97 yards on 15 carries and a touchdown before leaving the game in the second half with what looked to be a lower body injury after getting awkwardly taken to the ground.

On defense for WMU, AJ. Thomas, Ralph Holley, Corvin Moment and Braden Fiske each recorded a sack, with Thomas and Kneeland leading the way in tackles with six each.

For Central Michigan, quarterback Daniel Richardson finished 13-of-19 with 157 yards and a touchdown.

Dallas Dixon led the way in receiving for the Chippewas with four catches for 67 yards.

On the ground, Lewis carried the ball 16 times for 127 yards and a touchdown while Pimpleton had seven carries for 108 yards to go along with his three scores.

Along with Tyler going out with an injury, the Broncos are banged up at several key positions. Andre Carter did not make the trip after missing last week’s game, and on the other side of the defensive line, Ali Fayad was also held out.

On offense, receiver Skyy Moore missed Wednesday’s game after getting banged up in practice during the week while running back Jaxson Kincaide was also held out.

Lester said all of them should be back but that they have to be smart over these next 10 days before WMU plays its next game.

“We’ve got to be smart in these next 10 days, we’ve got to keep our conditioning up without really banging a ton, which is a fine line,” Lester said.

WMU will next play Northern Illinois at home on Saturday, Nov. 28. That game will kick off at noon and will be streamed on ESPN-Plus.