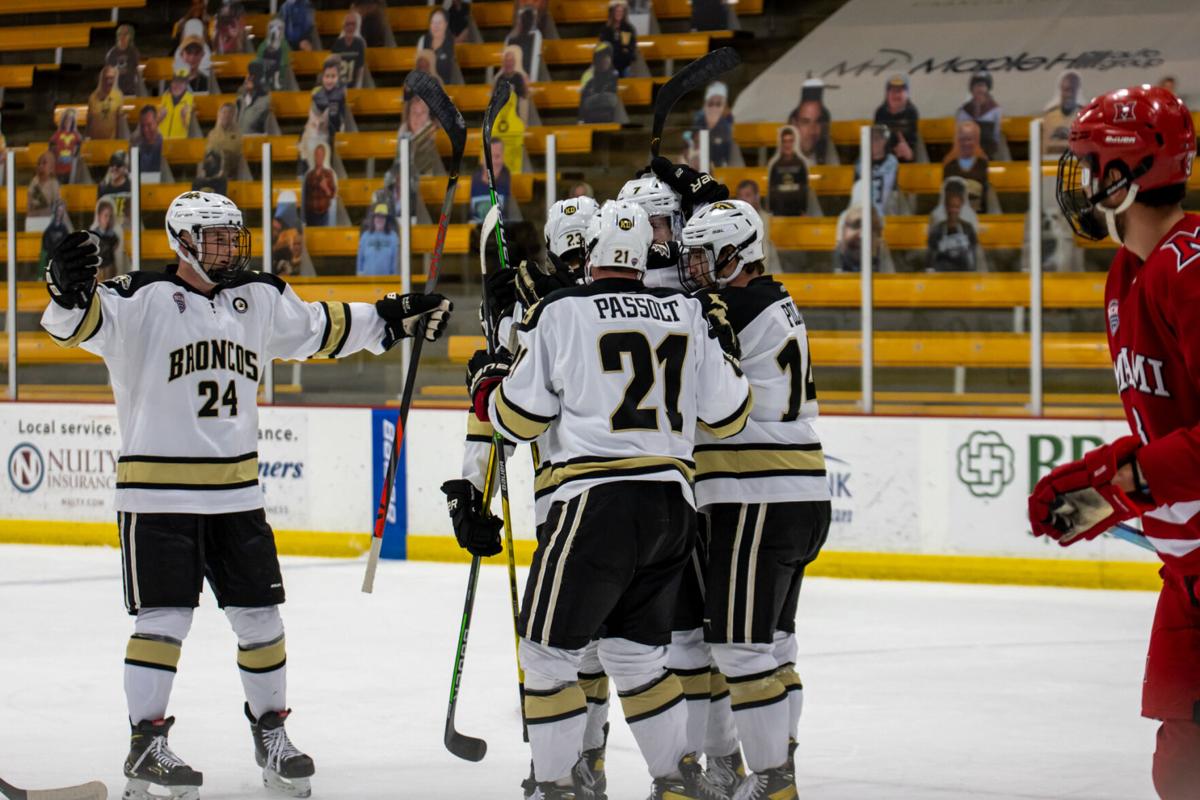 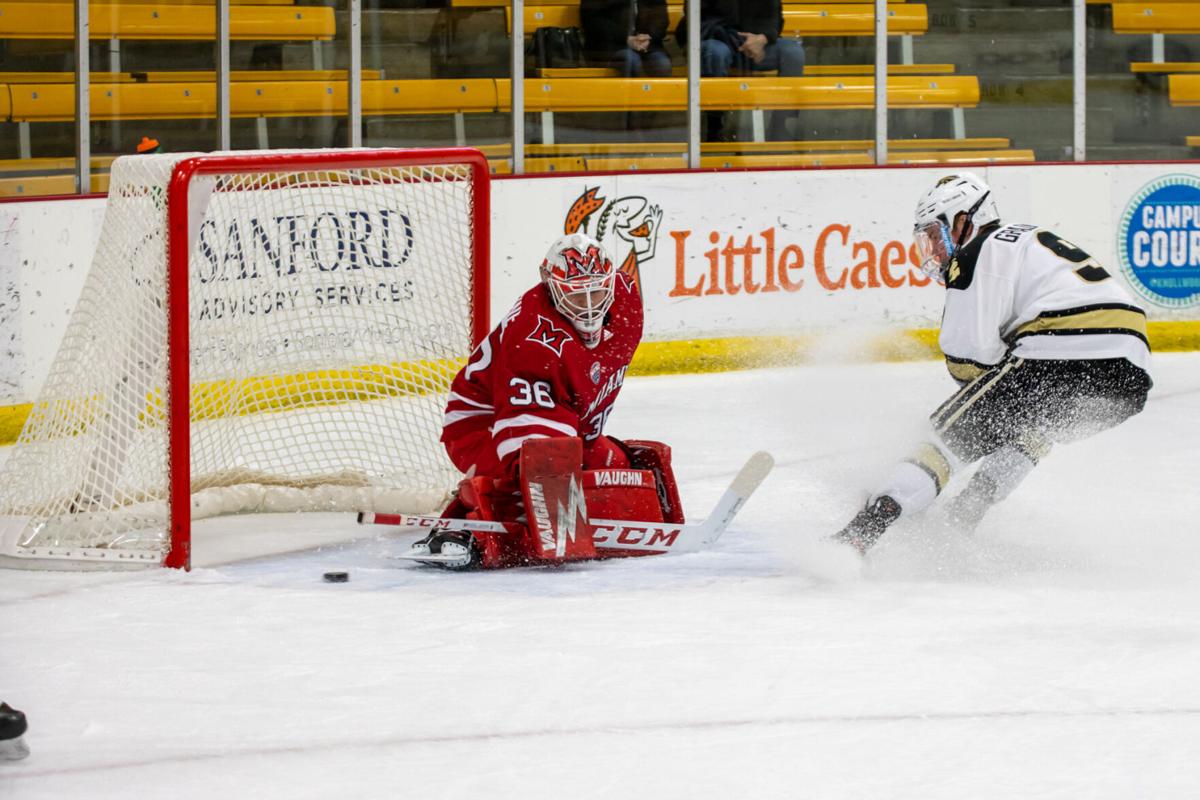 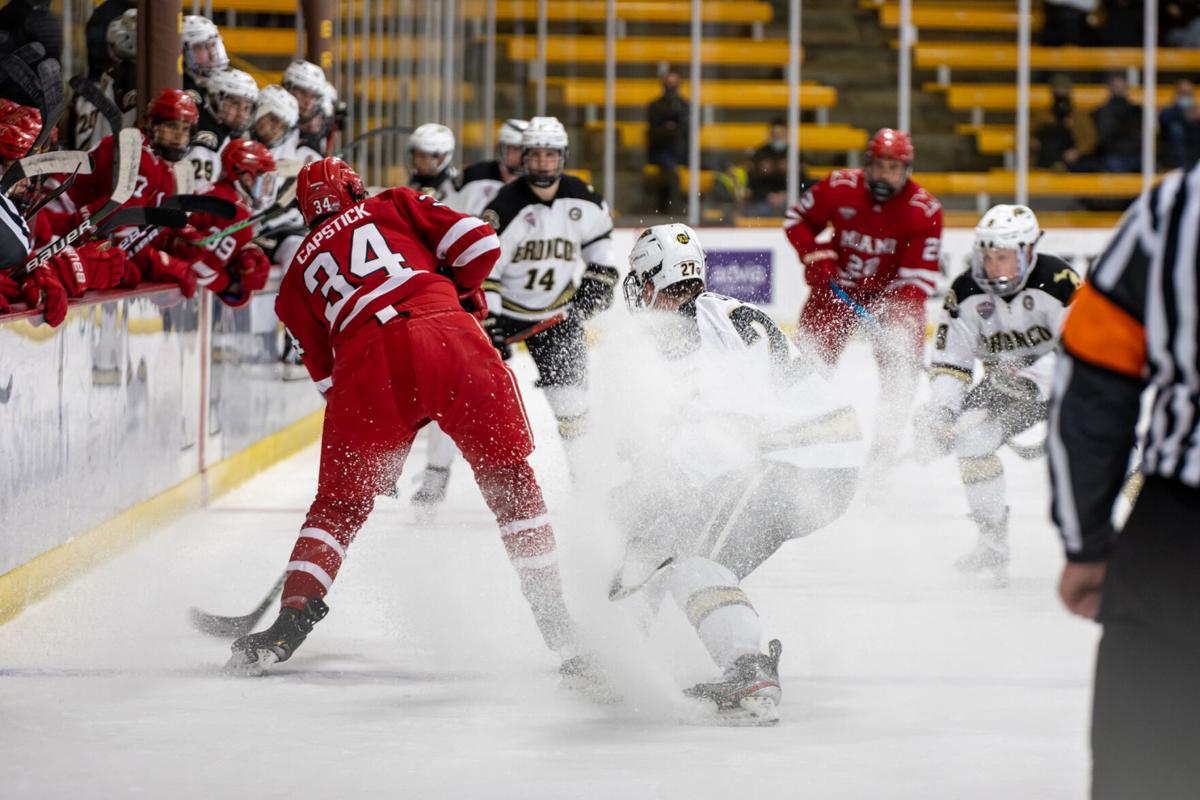 This game marked the return of goaltender Brandon Bussi, who hasn’t seen the ice in over two months, after an injury suffered in the second period of the first regular season game.

Both teams started the period slow, each getting multiple chances in front of the net to start the first 12 minutes of the period. Western Michigan had been on fire on the power play coming into this game, and tonight was no different. Ronnie Attard ensured that with a power play goal at 12:12 in the first period to put the Broncos in front, 1-0 . Paul Washe scored the second goal, also on the power play, at 19:49 in the first period to extend the Western Michigan lead to 2-0.

Three minutes into the second period, Miami cut the lead in half after a goal from Jack Olmstead off a faceoff to make the Bronco lead 2-1. The Broncos had another chance on the power play but gave up a shorthanded goal to Casey Gilling which tied the game at two. Western Michigan had many chances in front of the net but Ludvig Persson made many saves to prevent the game from becoming a blowout and allowing Miami to get back into the game after a 2-0 deficit.

The Broncos took the lead back after Drew Worrad scored off a rebound on a shot that was saved by Persson but the puck wasn’t frozen and Worrad found the puck and put it in the back of the net. Persson was injured after contact was made to his head. Persson was replaced with Grant Valentine for the RedHawks as WMU led, 3-2.

The Broncos continued to dominate in the shot department after two periods, outshooting the RedHawks 30-15. Western Michigan was having trouble figuring out Persson in the second before he went down with injury as he saved 24 of 27 shots.

Western Michigan started the third period with shots in front of the net, but a few shots went wide and a puck off the post by Ethen Frank kept the score at 3-2. Western Michigan’s power play streak continued with another power play goal, this one scored by Jason Polin to extend the lead to 4-2. The Broncos have now scored six power play goals in their last seven chances. Right after the Broncos put up another goal thanks to Jamie Rome to bring the lead to 5-2 and the score finished that way.

Western Michigan outshot Miami 41-28 and the injury of Persson was the turning point for the Broncos as they had their way with Valentine in the net for the third period to win the game by three goals.

This was the final game for seniors Kale Bennett, Austin Cain, Ethen Frank, Josh Passolt, Lukas Samuelsson, Brett Van Os and Paul Washe at Lawson Ice Arena and the seniors were honored with a video package before the game.

Western Michigan will finish its regular season with the second part of the home-and-home against Miami on the road in Oxford, Ohio Sunday at 2 p.m. That game will air nationally on CBS Sports Network.