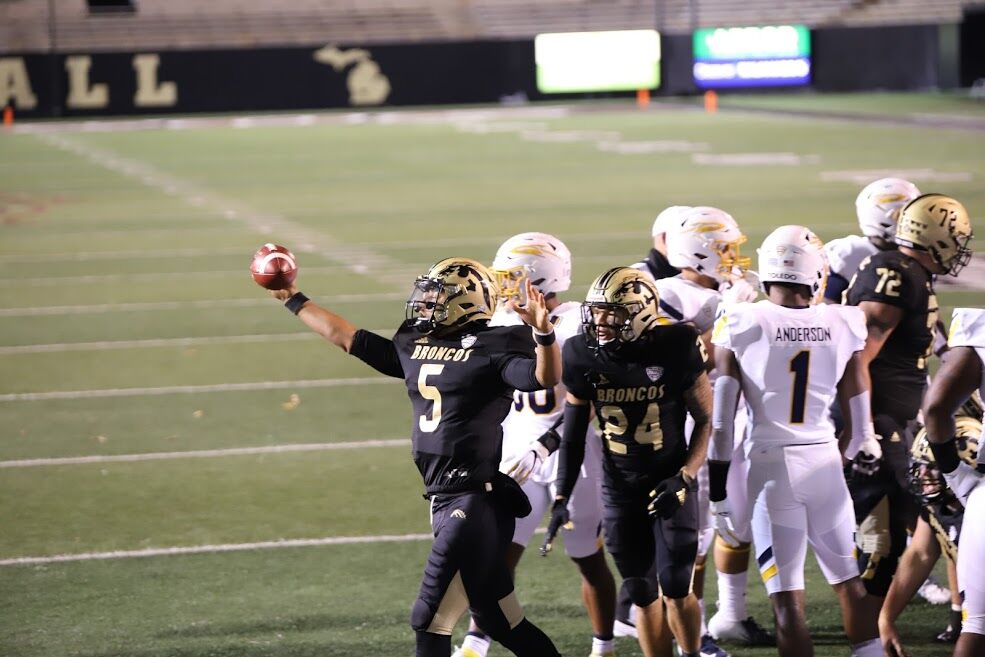 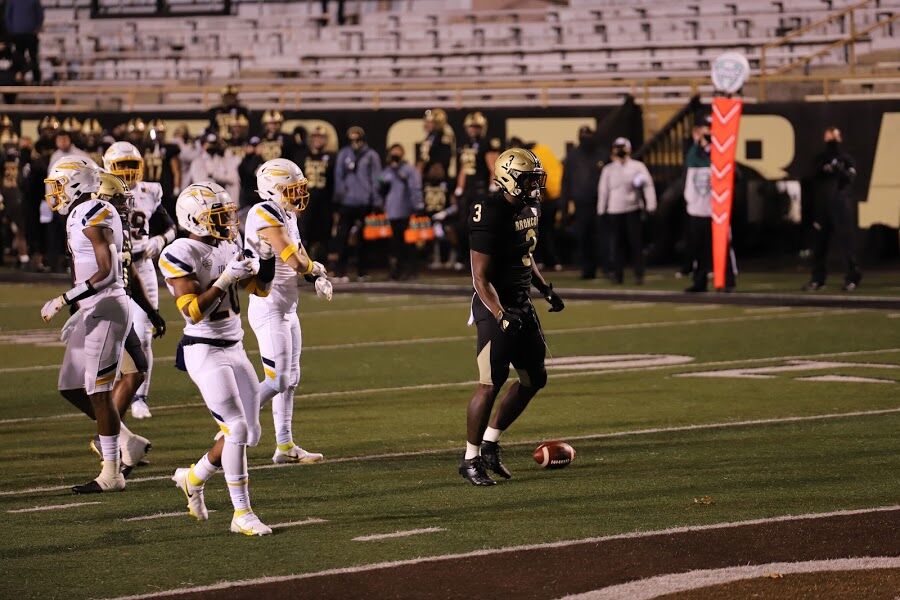 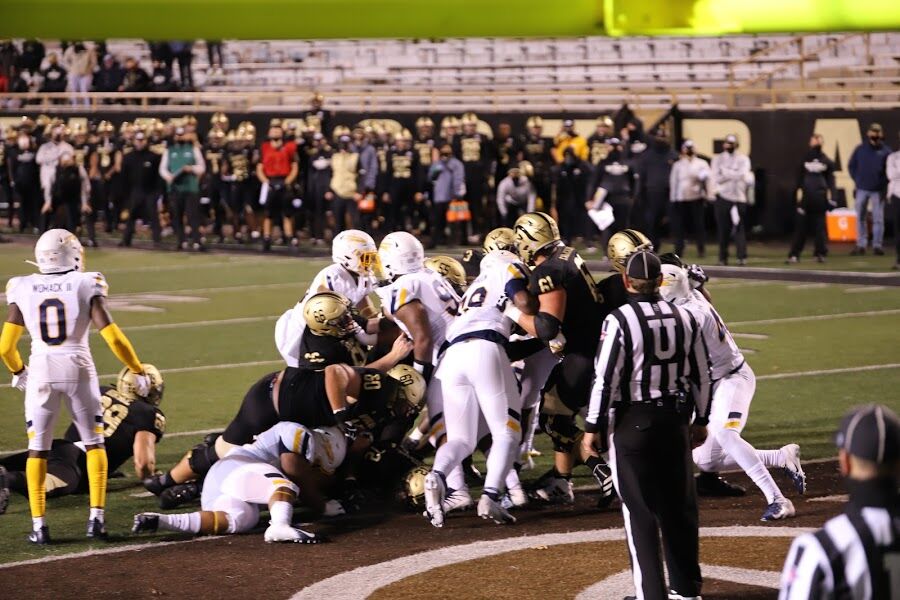 WMU football completed a thrilling, last-minute comeback win over the Toledo Rockets on Wednesday night to put the Broncos at 2-0 on the season with four regular season games remaining.

Here are three takeaways from the action.

WMU redshirt sophomore quarterback Kaleb Eleby had a trick up his sleeve as the Broncos executed a fake spike with 17 seconds left in the game down four.

Eleby found receiver Jaylen Hall uncovered in the endzone on the play to complete the 41-38 miracle comeback.

“I think it’s just a testament of this team,” Eleby said about the Broncos being able to pull off the win. “Everybody talks about the last play but honestly, that doesn’t happen without the onside kick. It’s the small details, and like I say, we’re just really resilient.”

In the game’s final stages, Toledo looked to have the game wrapped up when it took a 38-28 on a Bryant Koback touchdown run with 2:54 remaining after the Rockets converted a critical 4th-and-11 on the previous play.

But the Broncos’ offense went down the field for a 70-yard drive in just over two minutes when Eleby snuck it in from one yard out for his second rushing touchdown of the game with 41 seconds left.

Then, it was the WMU special teams that made one of the game's biggest plays when punter Nick Mihalic recovered an onside kick at the Rockets’ 48-yard line to set up the wild finish.

Lester said he was proud of the fight his team showed with being able to find a way to win.

“We just kept fighting,” Lester said. “That was the biggest thing. The last two drives were impressive and to watch a young quarterback like Kaleb handle himself in that situation, that’s rare.”

Rockets win the battle of third down conversions, but Broncos make the big plays

WMU’s inability to get off the field on third downs on defense, as well as failing to convert them on the offensive side, put the Broncos in a tough position.

Toledo’s offense converted 9-of-16 third downs on the night while WMU’s offense was just 2-of-10.

As a result, Toledo was able to hold a big advantage in time of possession as the Rockets held the ball for 38:15 while the Broncos had it for just 21:28.

But WMU was able to make just enough plays both through the air and on the ground as they connected on several throughout the night.

Eleby, who finished 20-of-29 with 284 yards passing with three touchdowns and no interceptions, connected with D’Wayne Eskridge on a 47-yard slant route early in the second half to cut Toledo’s lead to 24-21.

He also hooked up with Skyy Moore for a 56-yard play in the first quarter, while Moore was able to find the endzone for his first touchdown of the season in the fourth with 9:06 to play.

WMU’s running game was mostly carried by Sean Tyler as Jaxson Kincaide and La’Darius Jefferson both left early with injuries. Tyler finished with 100 yards on 12 carries while Kincaide found the endzone on his only run of the game at the end of the first quarter from 21 yards out.

Lester said Toledo’s defense was difficult to play against, as the Rockets showed several different looks, but that Eleby did a nice job of making reads on RPOs.

“I don’t know how many times we actually dropped back to pass,” Lester said. “They were all decisions by the quarterback. We also knew late in the game that La’Darius was out and Kincaide was out, so we had running back and we definitely wanted to use him but we were trying to be smart about it.”

The Rockets were efficient on offense but averaged 5.9 yards per play compared to WMU’s 7.7.

Quarterback Eli Peters had 339 yards on 30-of-46 passing for the Rockets while throwing a touchdown and getting intercepted on a last ditch attempt at a hail mary.

Koback led Toledo in rushing with 78 yards on 24 carries and two touchdowns. Micah Kelly pitched in for eight carries, 69 yards and a score.

In a game that was deadlocked at 14-14 at the end of the first quarter, the Broncos did themselves no favors with penalties to help Toledo stretch its lead to 24-14 by the half.

On Toledo’s second drive of the game, quarterback Eli Peters threw a pass short of receiver Ronnie Blackmon in WMU’s territory, but safety Harrison Taylor came over to put a hit on Blackmon that was flagged for 15 yards for unnecessary roughness.

Rockets’ running back Shakif Seymour proceeded to take the next two carries for a combined 35 yards and scored on the second of those touches to give Toledo a 14-7 lead with 2:54 in the first quarter.

In the second quarter with the game knotted at 14, WMU lined up to punt and receiver DaShon Bussell put a big hit on Blackmon around the 15-yard line when Bussell was flagged for fair catch interference and ejected for targeting, putting the Broncos down a key wide receiver.

Toledo defensive end Desjaun Johnson was also ejected for targeting for a hit on Eleby early in the second quarter.

WMU’s biggest offensive penalty of the half came on its final drive of the second quarter when the Broncos were trying to chip into a 24-14 Toledo lead.

After Sean Tyler carried the ball twice for 33 yards to the Toledo 26-yard line, he was flagged 15 yards for unsportsmanlike conduct after his second carry of the drive to help stall the Broncos’ attempt at cutting the game to one possession.

Late in the third quarter, cornerback Patrick Lupro looked to come up with an interception on a poor Peters throw to the inside in the endzone, but was flagged for a questionable pass interference on the play.

Instead of a turnover in a 24-21 game after WMU struck on the 47-yard pass from Eleby to Eskridge in the middle of the quarter, the Broncos found themselves down 31-21 after a two-yard touchdown run by Kelly.

WMU had nine penalties for 102 yards while Toledo was flagged 11 times for 63 yards.

The Broncos will next head to Mount Pleasant to take on the Central Michigan Chippewas (2-0) on Wednesday, Nov. 18 at 7 p.m. for the battle for the Victory Cannon.

That game will be aired on ESPN2.

Still scratching my noggin over Coach L's decision about going for it on 4th and a long one in second quarter. D Eskridge looking All American Let's go and demolish Chipsters next week!

I sure am glad we won, but it was also pretty clear that Coach Lester got outcoach for most of this game. WMU's lack of discipline and wasted opportunities on offence would have cost us the the game had it not been for the late rally. Come on Coach Lester, you are better than that, and yes, we are still waiting for you to win a big game.