The Mid-American Conference should look into expansion in the near future to help with its performance struggles in recent years and economic struggles that have been heightened by the coronavirus pandemic.

In the summer of 1995, the MAC announced that Northern Illinois and Marshall were returning to the conference after the Huskies had spent 11 years in the MAC, from 1975-’76 to 1985-86, previously, and Marshall, who was transitioning up from Division I-AA (now FCS) for football and rejoining the MAC after their 20-year stint in the Southern Conference. Those two schools joined the MAC in the 1997-’98 academic year, and the conference also announced the arrival of Buffalo in the 1998-’99 academic year.

These additions, along with the Western Athletic Conference dropping from 16 teams to eight in 1999, made the MAC the largest Division I-A (now FBS) conference. Now only two of the 10 FBS conferences have fewer members than the MAC with 12.

In terms of football success, the MAC has been slipping since the latest round of conference realignment that ended with the MAC, Conference-USA and Sun Belt all fall near the bottom. By Sports-Reference’s Simple Rating System (SRS), the MAC ranked 10th out of 10 FBS conferences in 2019 following a steady decline from when they were as high as seventh in 2015.

SRS is also used for college basketball, and the MAC finished the not-quite-complete 2019-20 season ranked No. 12 out of 32 Division I conferences. They were ninth in 2018-19 behind the strength of Buffalo earning a No. 6 seed in the NCAA tournament, the highest any MAC team has been seeded since Toledo was a No. 5 seed in 1979. The MAC hasn’t sent multiple teams to the NCAA tourney since 1999 and ranks No. 13 in all-time tourney bids with 74 when you sort conferences by tournament appearances by the schools actively in that conference. This gives the American Athletic Conference credit for 202 tournament bids even though it has only existed since 2013.

Where could the conference look to expand?

The MAC has shown the potential to perform to a higher level than it has been, and a few additions to the conference could make the difference. I think the MAC should expand their geographic footprint a bit to add two current FCS powerhouses: North Dakota State and South Dakota State. NDSU has won eight of the past nine FCS championships while being led by three different coaches and the two schools have combined for the last eight Summit League men’s basketball championships.

NDSU football has been the team to beat at the FCS level for a decade now with no signs of slowing down. The Bison consistently produce NFL talent, having had five players drafted in the last six years including 2016 No. 2 overall pick Carson Wentz. Only two MAC schools have produced more NFL draft picks in that time: Toledo, with six, and Western Michigan, with seven. NDSU has earned six wins over Power 5 Conference opponents, including one of just five times in NCAA history when an FCS team beat a ranked FBS team when they beat No. 13 Iowa in 2016.

The Bison has only been eligible for Division I postseason play since 2009, but its basketball program wasted no time making its mark. NDSU won its first-ever Summit League tournament in ‘09, and won their first NCAA tournament game in 2014 in their second appearance, taking down 5-seed Oklahoma. They went back to the tourney again in 2015 and ‘18 and tied SDSU for the conference title in 2019-20.

SDSU football hasn’t had quite the same success as their rivals to the North, but the Jackrabbits can hold their own on the gridiron. Having gone to each of the past eight FCS playoffs, SDSU made back-to-back trips to the semifinals in 2017 and ‘18 and produced a draft pick in both of those years, with Dallas Goedert drafted in the second round in 2018 as the second-highest draft pick out of SDSU of all time.

The Jackrabbits basketball program could make an immediate difference in the MAC. Like NDSU, they finished their transition to Division I and became eligible for postseason play in 2009. They have played in a postseason tournament every year since 2012, when they won their first Summit League tournament championship. After repeating as conference champs in 2013, they made appearances in the College Basketball Invitational in 2014 and National Invitational tournament in 2015. From 2016-’18, they made three consecutive trips to March Madness, earning a No. 12 seed in ‘16 and ‘18. In 2019, they were back in the NIT after losing early in the conference tournament in spite of winning the regular season championship.

In terms of the facilities, NDSU is unique in that its football field is indoors. The Fargodome would be just the fifth indoor facility to house an FBS team, and two of those indoor facilities also house an NFL team. Its current capacity is 19,000, which would be the smallest in the MAC but above the 15,000 FBS minimum. Being an indoor stadium makes it hard to add seats, but it is believed that interior construction including moving the press box from the east side to the west side could allow the capacity to increase to as much as 25,000.

NDSU’s basketball arena, the Scheels Center, was built in 1970 but underwent a major renovation from 2014-2016 and seats 5,700. That makes it slightly larger than University Arena at WMU and in the normal range for a MAC basketball arena. The renovation was part of a $50 million project to create the Sanford Health Athletic Complex which holds the arena along with a basketball performance center. The university has shown a clear commitment to athletic success.

SDSU completed construction on a new football stadium in 2016. Dana J Dykhouse Stadium holds 19,340 people, which is again smaller than any current MAC stadiums, but the MAC sees very few sellouts for their football games anyway. ESPN hosted a “College GameDay” at SDSU in 2019 and has twice hosted its college football pregame show at NDSU. The MAC has two combined “College GameDay” hostings among its 12 schools.

SDSU plays basketball in Frost Arena, which opened in 1973. Frost Arena can seat 6,500 fans for basketball, which would be fifth-most in the MAC. The problem with it is that practice hoops can be seen in the rafters at games, giving it almost a high school feel. A major renovation is planned similar to what NDSU did with the Scheels Center as the two programs joined Division I during the 21st century and are still putting the finishing touches on making their facilities look like it.

In 2014, South Dakota State completed the Sanford Jackrabbit Athletic Complex, which currently stands as the largest indoor practice facility in Division I sports at 149,384 square feet. Both of these universities have made it clear that they want their athletic programs to succeed and are willing to spend the money required to do so. 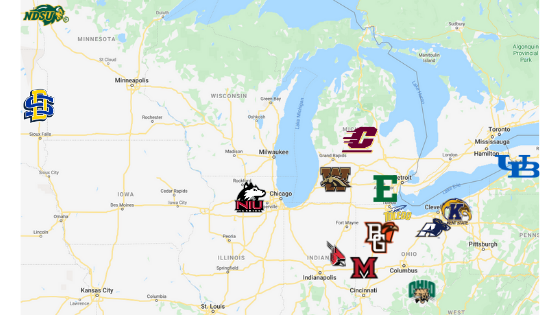 It would take inventive scheduling to deal with this. Trips to NDSU on Thursday and SDSU on Saturday, or SDSU on Friday and NDSU on Sunday could work for trying to allow student-athletes the opportunity to attend as many classes as possible. There is no great way to keep the Bison and Jackrabbits from having to do some brutal travel. If the MAC offered them a spot, they very well might say, “No, thanks.” They might be comfortable being some of the best football programs in the FCS and have its basketball teams consistently in the NCAA tournament by being the top teams in the Summit League.

For the MAC, it makes sense to grab some programs that are on the rise and whose administrations have shown a clear desire to improve their athletics. It needs to do something to show that it can still be a competitive conference moving forward.

As a fervent college sports fan and a letter winner out of East Carolina in football, I follow sports and particularly conference realignment closely. I agree with your comments about NDSU and SDSU as possible additions to the MAC. However, two other additions strike me as needing consideration. (Please note, I am not trying to rip off old scabs with one of the following candidates.) UConn and Marshall strike me as more organic and natural candidates. UConn would also bring some small slice of the NYC TV market for football. I am also willing to give the MAC the benefit of the doubt about adding a football only school.

Thank you for the opportunity to post. Thoughts on my comments/suggestions? 66Pirate.

I don’t disagree, that adding conference members may help the league. But Western will not benefit from playing North or SouthDakota teams. Currently Western plays in the toughest college hockey league in the nation and North Dakota is a perennial power, yet Western doesn’t sell out for North Dakota often. Western needs cross state rivals. Both Ferris State and Grand Valley are division II or III and win every year. Bring them to the MAC West.