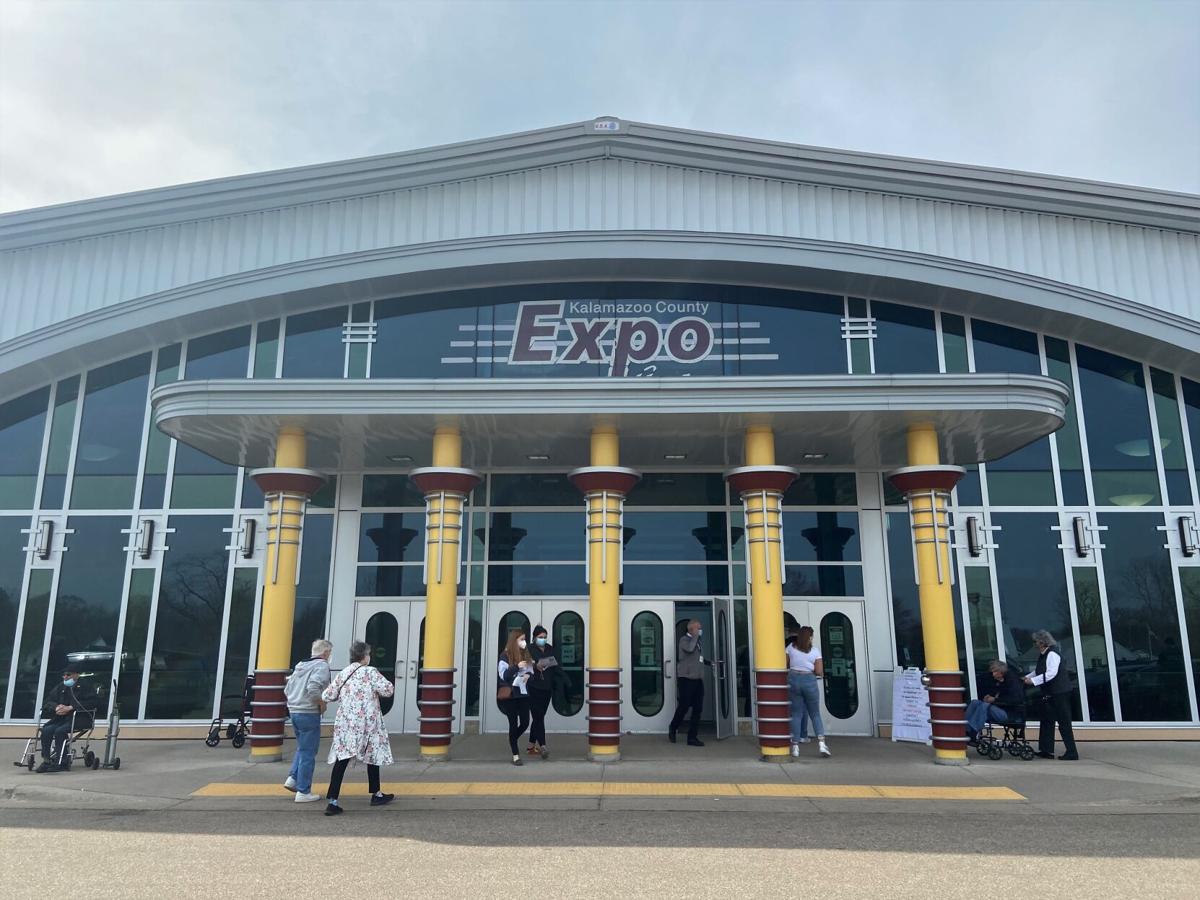 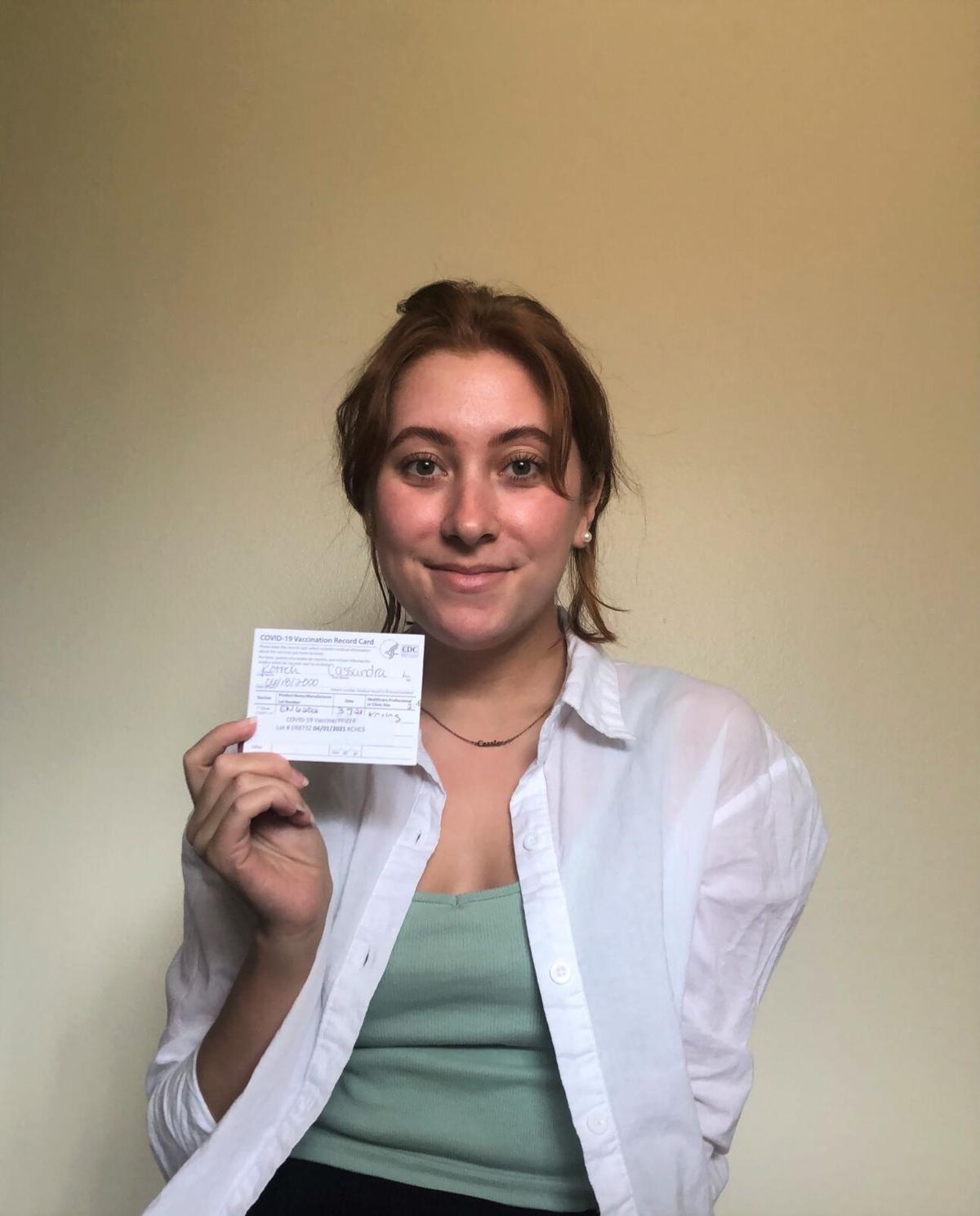 Cassie Kotrch sits and holds her completed vaccination card after being fully vaccinated by the Kalamazoo County.

As we weaved in and out of the crowds of people and numerous cars in the parking lot, I was glad my boss had warned me to arrive at the Kalamazoo County Expo Center early. My boyfriend parked and suddenly I became a nervous wreck; I don’t like getting poked.

As I walked in the front doors, one of the volunteers asked if I had an appointment and if I had any symptoms. Easy enough questions, I thought, before they directed me to stage one.

For my first shot, I had never been so lost and confused, following the crowd and hoping I was doing the right thing. The line was so long and the room so large it was almost intimidating.

I had my license ready as instructed, but was never asked for it. A woman called me up to her table, found my name on the long list, highlighted it, and handed me my paperwork.

Again, I followed the crowd to what I sincerely hoped was stage two. There, a man handed me a sanitized pen and pointed to the tables where I was directed to fill out my paperwork.

The paperwork was short and sweet, asking my personal information and my employer information, the reason I had the privilege of being vaccinated early.

After waiting in another long line, I handed the paperwork to a volunteer seated at one of the tables at stage three. There, they decided how long a person was to wait in observation. Unfortunately, on account of my allergies, I got the maximum: 30 minutes.

A sign on the ropes guiding us to station four read: “We are administering the Pfizer vaccine today.”

There were about 10-15 stations each with a table and two to four volunteers. A man named Ray with two wands you’d see marshalling an airplane on a runway directed me to the marker right in front of me. I made the assumption then that he was having fun.

“I like your shirt. Thoughts are so hard to come by, and that causes them,” Ray said to me. I had no idea what to make of this, but considered it a good omen for my first dose.

The shot itself went quick, and the KVCC nursing student who administered it was kind and obviously exhausted, explaining she had done too many to count that day. The observation, however, did not go as quick.

A lively gentleman in military uniform that cheered me on made the time there much better, though. After scheduling my second dose and waiting, I left the building with free masks and an extremely sore arm that felt hot to the touch.

After my first dose, I only had arm soreness and extreme fatigue, so I brushed off any nervous feelings for my second dose and walked up the Expo Center yet again about three weeks later.

Immediately I noticed the lack of armed guards and police officers; there were many more during my first dose. This time, a volunteer guarding the front door asked me for my appointment time and let me in ahead of people waiting.

I moved so quickly through each of the stations again, I could tell that they had a routine down and were much more organized with the process. This time, I showed my license and my vaccine card to get my second dose.

Again, a nursing student administered my shot. She warned me that this one “may be annoying”, and about 12 hours later I realized just how right she was.

Oh was I a fool. The side effects were so gradual that I did not take any medicine, assuming I would have none. But, by the next day around noon, it was too late.

My body erupted in aches and pains and I struggled with a high fever and chills. After taking a long and painful nap, a blinding headache snapped me back to reality from my fever dreams. I almost regretted getting vaccinated.

But then, I got the message that someone else I know tested positive for COVID-19 and I thought about my grandma, my best friend, who I was visiting in two days. Then, I was beyond grateful; especially that I would never have to struggle through what my roommate and dad had when they had COVID-19.

The next day I felt like a new woman, my symptoms had completely disappeared. I was well rested, feeling good and free to be with the people I love.