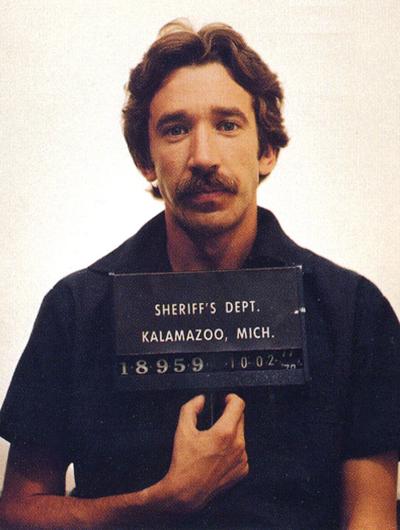 Shortly after I graduated from Western Michigan University, a bright young comedian named Tim Allen started getting national attention for his stand-up routines. His cable specials were popular and success landed him a sitcom on the ABC television network, called “Home Improvement.”

As his career took off, his WMU-alumnus status became known. He insisted that only Michigan schools be represented in the show’s wardrobe. It even led to a special guest appearance of thenWMU President Diether Haenicke, where Allen’s character was presented with an honorary degree.

In the real world, Haenicke bestowed Allen with an honorary doctoral degree in 1998. After “Home Improvement,” Allen parlayed his success into a string of popular family movies, notably during this season, his “Santa Clause” movies, and voicing my son’s favorite character, Buzz Lightyear, in the “Toy Story” franchise.

As a proud WMU alum, it was great to tell my little boy I went to the same school as Buzz! Later Allen got another ABC sitcom, “Last Man Standing,” which was cancelled after six seasons due to poor ratings. Allen claimed it was cancelled due to the conservative political nature of the show, and Fox resurrected it last year to better ratings. Full disclosure, I’ve never seen an episode of “Last Man Standing.”

We all change over our lives. It is unreasonable to expect even a famous person to remain unchanged over a successful 30+ year career. But Allen’s sense of humor seems less fun, more dark recently.

My wife often refers to people who use humor to look down on others as “punching down.” Allen’s humor has morphed into the punching down variety. It is a crass and cruel way to get a laugh.

In a 2013 Tampa Bay Times interview, Allen said, “If I have no intent, if I show no intent, if I clearly am not a racist, then how can 'n —' be bad coming out of my mouth?" Allen then said, "[The phrase] 'the n-word' is worse to me than n—." Allen doesn’t seem to understand that to many people, uttering that word makes one a racist.

On November 25, 2019, Allen appeared on NBC’s “The View,” where he said “You can't even go back and talk about the book [Richard Pryor, a famous African-American comedian from the 1970s] wrote...And you know, what I got to do sometimes sometimes is explain - which I hate - in big arenas, that this is a thought police thing and I do not like it. But when I use these words, this is my intent behind those words.

So as long as you know my intent... I still get people who say, 'Just don't say it.' And I said I'm not going to do that.” Punching down. The rich white man feels oppressed because he cannot utter a highly offensive racial slur in the name of comedy. This isn’t about some mythical “thought police,” it is about what is decent and acceptable in our inclusive society.

I came from a rural, almost exclusively white conservative community. That was how I was raised. Attending WMU expanded my horizons far beyond that upbringing. Through classes and ridesharing, I befriended a few African American students as we rode back and forth to Kalamazoo during school breaks.

I played on an intramural soccer team that had students from Turkey, Sweden, Iran, Malaysia and a few other nations that escape me. I’m still In touch with some. So when I see a prominent member of the WMU alumni community go on national TV and complain he can’t use the “n-word,” it really goes against the grain of a critical intangible lesson that I learned in Kalamazoo. Allen cited Richard Pryor, one of a handful of African-American comics whose rise to stardom followed soon after the ratification of the Civil Rights Act of 1965. The dissolution of Jim Crow laws gave African Americans the ability to freely explore and express their identity, with less fear of white oppression. Pryor used the word as a form of liberation for his comedy. Lenny Bruce scandalously dropped f-bombs and Pryor’s routine was peppered with racial epithets, including ones about white people.

He also included his on-going struggles with drugs as part of his routine, which contributed to a societal re-examination of how addicts and alcoholics were treated by our culture. Pryor used shocking words to jolt society out of its malaise. He used them, along with his humor, to expose the inherent inequality and absurdity of his time.

Allen doesn’t want to utter racial slurs to point out society’s foibles and biases. He wants to use them to lash out at the idea of political correctness. He sees PC as a limit on his expression. What PC is, actually, is being a decent person to others. His character on “Home Improvement” reflected a lot of the brilliant humor he had in his stand-up act. The worst aspects of his role on “Last Man Standing,” entertaining a more conservative audience, seems to have made his humor more divisive, more of the “punching down” nature. His humor certainly does not reflect the experiences I got as a WMU student, and I believe it does not reflect the values of the WMU community. In both the 2013 interview, and last month on “The View,” Allen demonstrated that he doesn’t get it. To go from the lovably inept, grunting, alpha male of “Home Improvement” to some guy who can only get laughs by offending others, is a sad way to continue a career.

I believe Allen’s descent to offensive, divisive humor no longer reflects WMU values. Therefore, I call on WMU President Edward Montgomery, the WMU Board of Trustees, and the WMU community at large to reject and disavow Allen’s comments and rescind the honorary doctoral degree that it bestowed upon him in 1998. Allen’s association with WMU should end, if he continues to embrace such racist and divisive views. Punching down is not a Bronco value.

Disclaimer: The views expressed by the writer are not necessarily those of Western Herald or its editorial staff.