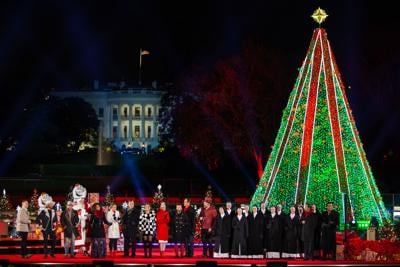 Impeachment came a week before Christmas.

Some of us saw it as an early present, others not so much. Like any family holiday, as we get older Christmas is as often something we wish we could avoid as it is a time of yuletide merriment. It is a list of obligations: people we must talk to, parties we must go to. And, perhaps most egregiously of all, we must endure listening to our relatives’ politics.

Last week I visited my great-grandmother for dinner. Before going, I was told to try and avoid talking about impeachment. I did my best, but when talking to an 82-year-old woman who spends her day spent with Fox News blasting on all TVs the Venn diagram of topics of conversation that she’s liable to bring up and topics that could be considered politics is just a circle. So I spent most of that dinner deflecting, trying to change topics, and when I left I was bitter.

I think trying to avoid politics does everyone a disservice. We live in a democracy, and as a system of governance democracies work best when those in it are engaged in discourse, when their attitudes are challenged and fluid. I left my great-grandmother’s bitter because I had to pretend like I didn’t disagree with every word she spoke. I think that talking about politics is important because, when done well, it allows us to share real-world manifestations of our principals. It allows us another channel to present ourselves as we are to our family. To be understood and, hopefully, accepted.

But no one wants to spend Christmas in a shouting match.

The above understood, I would like to present a case study in how to talk politics without ruining the holiday spirit.

My mom, like most of my family, voted for Trump in 2016. I was, and have since been, confused more than anything else. My mom is kind, accepting, well spoken, educated, and when I heard her support Trump I was confused because the way she taught me to act—the things she taught me were right and wrong—and the ways Trump acts are opposites in every respect.

So I asked her about it.

We watched the movie Vice as a family. The movie details the political career of Dick Cheney, George W. Bush’s Vice President and the mastermind behind the 2003 invasion of Iraq. After, she was shocked. She learned a lot, she said, and then she said something that struck me.

“I can’t imagine calling people terrorists simply because of their religion,” she said, referencing a scene where Cheney ordered the extraordinary rendition of a Muslim cleric with no reliable intelligence suggesting that he had any terrorist ties.

I saw an opportunity.

“How come,” I asked her, “you voted for a president who does that very thing?”

She was silent for a few minutes. Then we talked. It was a good conversation, we both managed to drop any pretenses of judgement or argumentation. We talked to understand, not to convince, and in the end a breakthrough.

“If I could go back to 2016, knowing what I know now, I’d vote different,” she said, adding that she doesn’t plan to vote for Trump in 2020. There was no shouting, no telling me I was too young to know about politics, just talking and reflection on both our parts. I conceded that Hillary Clinton wasn’t the strongest candidate.

If you’ve ever had to read Plato for a class, then you might remember that Socrates argued almost exclusively through questions. Now, I’m not as smart as Socrates, and I imagine most of us aren’t, but I think the strategy is effective. When I had dinner with my great-grandmother, I was anxious because I felt I couldn’t assert my position. When I talked with my mom, I didn’t assert anything. I only asked questions—pointed to the dissonance between her beliefs as spoken and her voting record—and these questions, carefully considered, revealed to her that she had voted against her conscience. And so she admitted to making a mistake.

Admittedly, it can be frustrating. I’ve loved politics since middle school. I know it’s not exactly the most fun way to spend the holidays. Nonetheless, when we are in the midst of a constitutional crisis, I think avoiding these conversations will only contribute to the ongoing decay of civic duty in America.