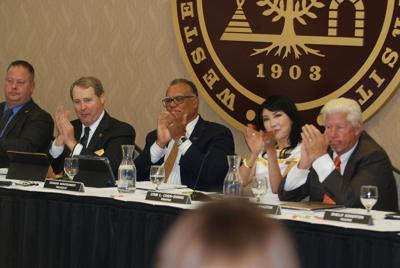 WMU’s Board of Trustees approved a raise of nearly $25,000 and a five-year contract extension for President Edward Montgomery in a meeting on Thursday, Dec. 12.

The decision comes after a review of Montgomery’s performance. His contract with the university now extends to June 30, 2025 and his base salary will be $486,000 a year. Montgomery will also be eligible for merit based bonuses up to 10% of his salary.

“The Board supports President Montgomery’s effort to compel organizational achievement through focusing in on transformational priorities to include: second year student retention; six year graduation rate; alumni giving; externally funded research; entering student GPA; and university reputation,” read the statement approved by trustees on Thursday. “The Board will continue to track progress relating to improving student success, diversifying revenue streams, and positioning WMU as the school of choice for the region and beyond.”

The Board of Trustees will establish goals for the merit-based bonuses in an annual meeting with Montgomery.

“The Board of Trustees is unified in their acknowledgement of President Edward Montgomery’s exemplary leadership of WMU,” the board said in the statement.

The announcement of Montgomery’s renewal comes at challenging time for the university. The university has faced budgetary and enrollment issues. Moreover, third party research conducted at the request of the university revealed that more than half of prospective undergraduates consider WMU a “back-up school” as do half of the university’s staff and faculty.

In his time at the university, Montgomery has been vocal about addressing these issues with a focus on making WMU a “school of choice” for Michigan undergraduates.

“Each year we must demonstrate incredible value that gives students a reason to enroll here, funders a reason to support our research and creative activities, and alumni and supporters a reason to give back,” Montgomery said in his 2019 Fall Convocation speech. “We must stand out. We must give them a reason why WMU should be their first school of choice.”

With the salary increase Montgomery will be the sixth highest paid president out of the 12 schools in the Mid-American Conference. Montgomery was honored for his work both in academia and as a public servant this summer with his election to the American Academy of Arts and Sciences.

WMU’s Board of Trustees approved a raise of nearly $25,000 and a five-year contract extension until June 30, 2025 for President Edward Montgomery in a meeting on Thursday, Dec. 12.