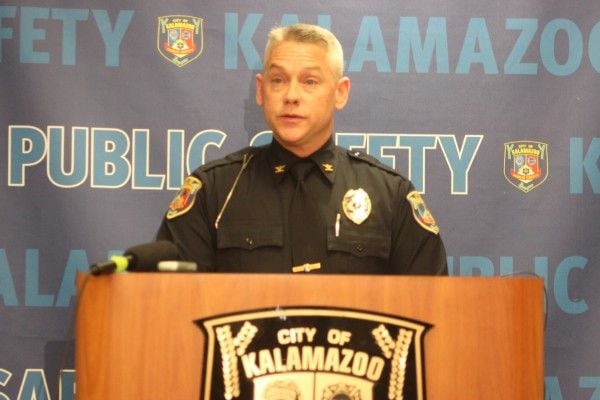 Mason's handgun was a "Galaxy" Air-Soft handgun. Mason had removed the orange safety tip, according to KDPS reports. (KDPS report)

Mason's handgun was a "Galaxy" Air-Soft handgun. Mason had removed the orange safety tip, according to KDPS reports. (KDPS report)

Suicide by cop may have been a factor in the officer-involved shooting that killed 42-year-old Brad Allen Mason on Friday Feb. 7 in Kalamazoo's Vine neighborhood, according to Kalamazoo Department of Public Safety Chief Jeff Hadley.

The shooting took place at 103 W. Dutton St., as police had identified and sought after Mason as the primary suspect in a rape/abduction case from Wednesday Feb. 5 on Westnedge Hill, when Mason allegedly abducted and raped a 24-year-old female.

Hadley said that Mason was a registered sex offender known to drive a red pick-up truck "matching the description of the one given by the victim of the abduction/rape."

Based on Mason's description and investigation, KDPS officers and detectives sought Mason on Friday Feb. 7 at 5:36 p.m. in his home on Dutton Street by obtaining a search warrant, and was let in to the building by Mason's landlord. Police were then met by Mason, who pointed a handgun at the officers.

Public Safety Officers retreated to the porch area and instructed Mason to drop the handgun but he did not comply. Public Safety Officers fired their weapons "in an effort to stop the immediate and imminent threat that Mr. Mason posed to them and their safety," Hadley said. Upon being hit by gunfire multiple times, Mason was handcuffed and CPR and life-saving efforts were immediately rendered to Mason. Mason was pronounced dead on the scene.

"There is nothing that leads me to believe that these officers acted anything but valiantly and with the upmost courage and professionalism," Hadley said.

The two officers that were involved in the shooting are currently on excused time off, and Hadley did not identify the officers.

"On the face, [suicide by cop] is certainly what it appears to be," said Hadley, and noted that Mason left three notes before he confronted the police when they arrived at his address.

One letter was addressed to a family member and the other two were meant for separate friends. One of the letters included a "Last Will and Testament", according to Hadley.

Hadley added that Mason's girlfriend, who has not been identified, said in a statement to the police that Mason told her on the night of the shooting that "the police are here, they are going to have to kill me."

"I believe the statements made by Mr. Mason to his girlfriend just prior to his engaging the officers and pointing the handgun at them, coupled with the three handwritten letters and the text within those letters, points to a conclusion that Mr. Mason sought," said Hadley.

Police have identified the handgun used by Mason as a "Galaxy" Air-Soft handgun. Hadley said that the orange safety tip had been removed from the handgun.

"In interviews with Mr. Mason's girlfriend the night of the shooting she advised that [the Air-Soft handgun] was purchased by them sometime in November of 2012," said Hadley. "In looking at the handgun it would be impossible for anyone, including an officer to distinguish this weapon from any other."

Hadley said police do not know  if the victim of the abduction/rape case, in which Mason was a suspect, was a Western Michigan University student.