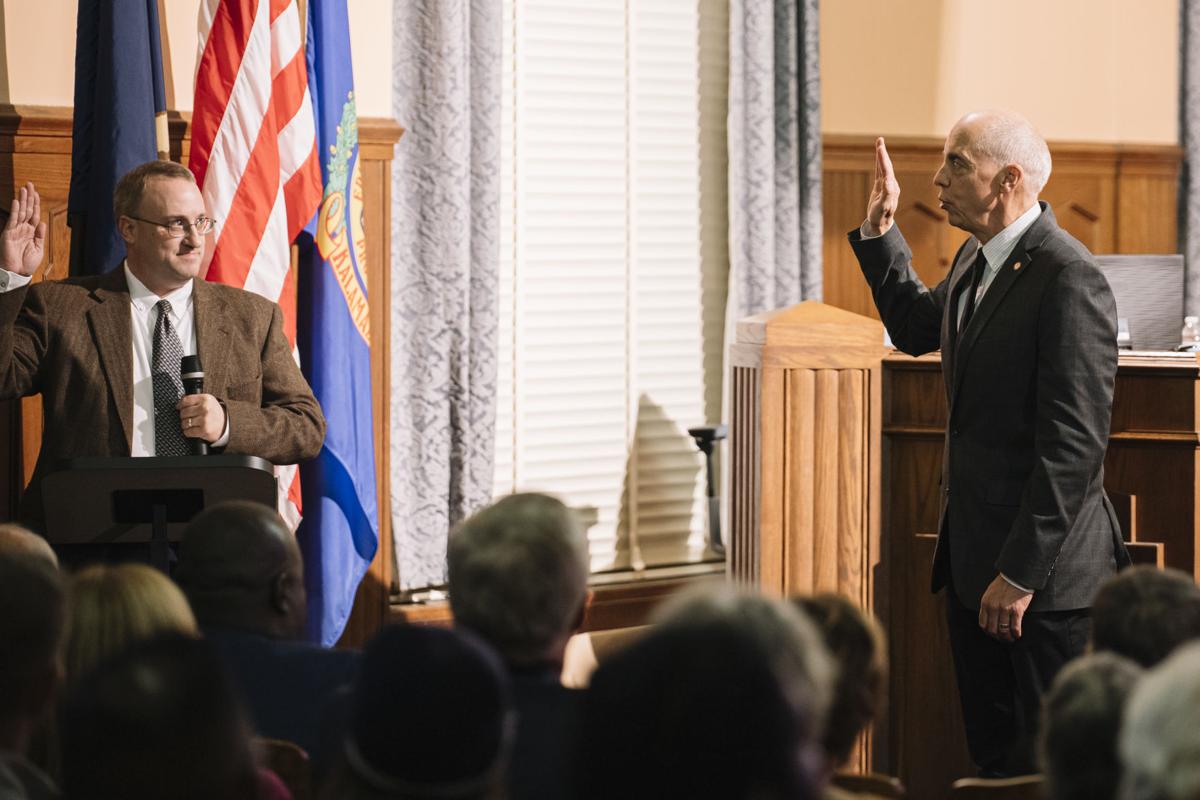 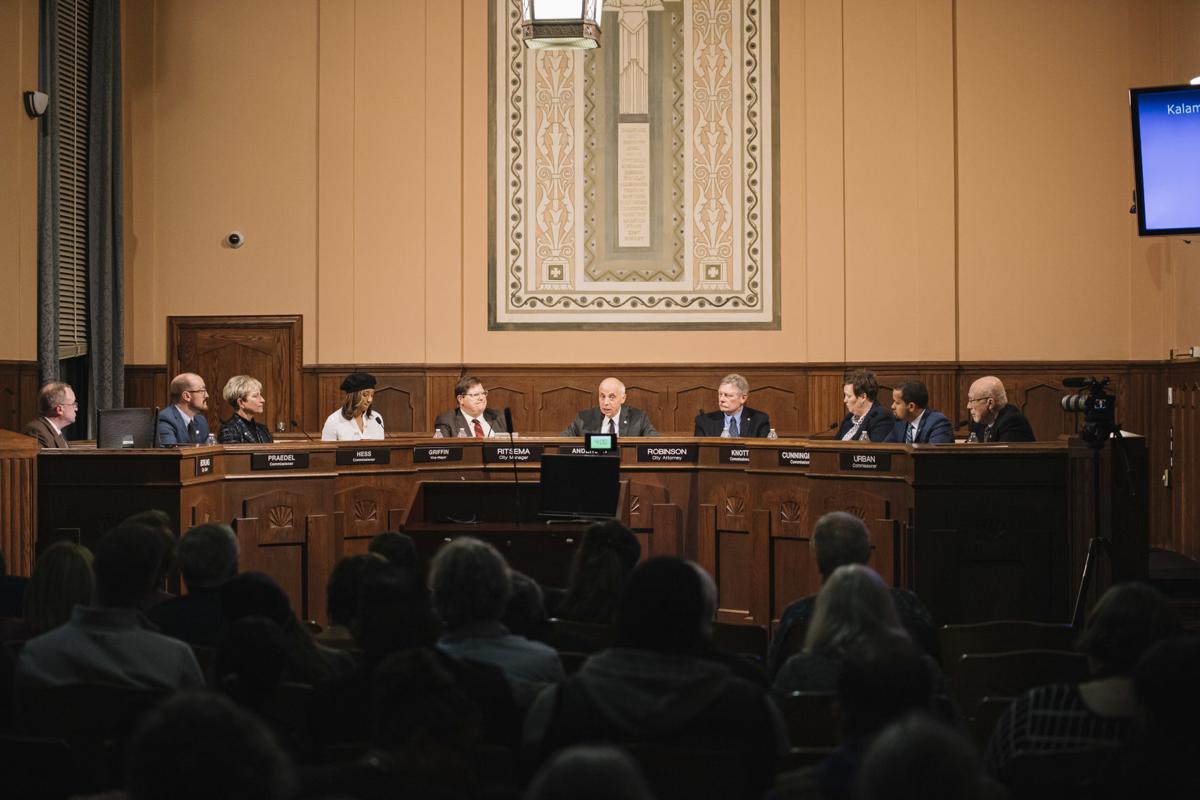 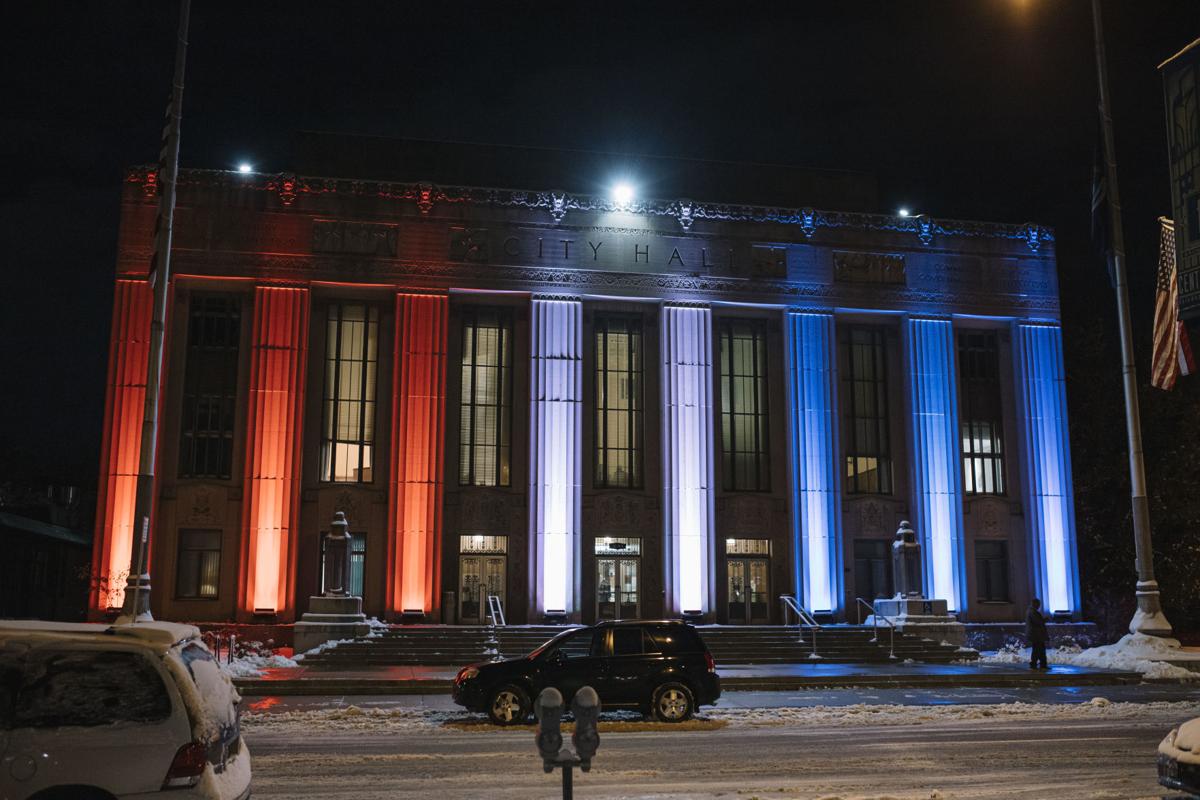 City Hall was lit red, white and blue on the night Mayor Anderson took his Oath of Office. 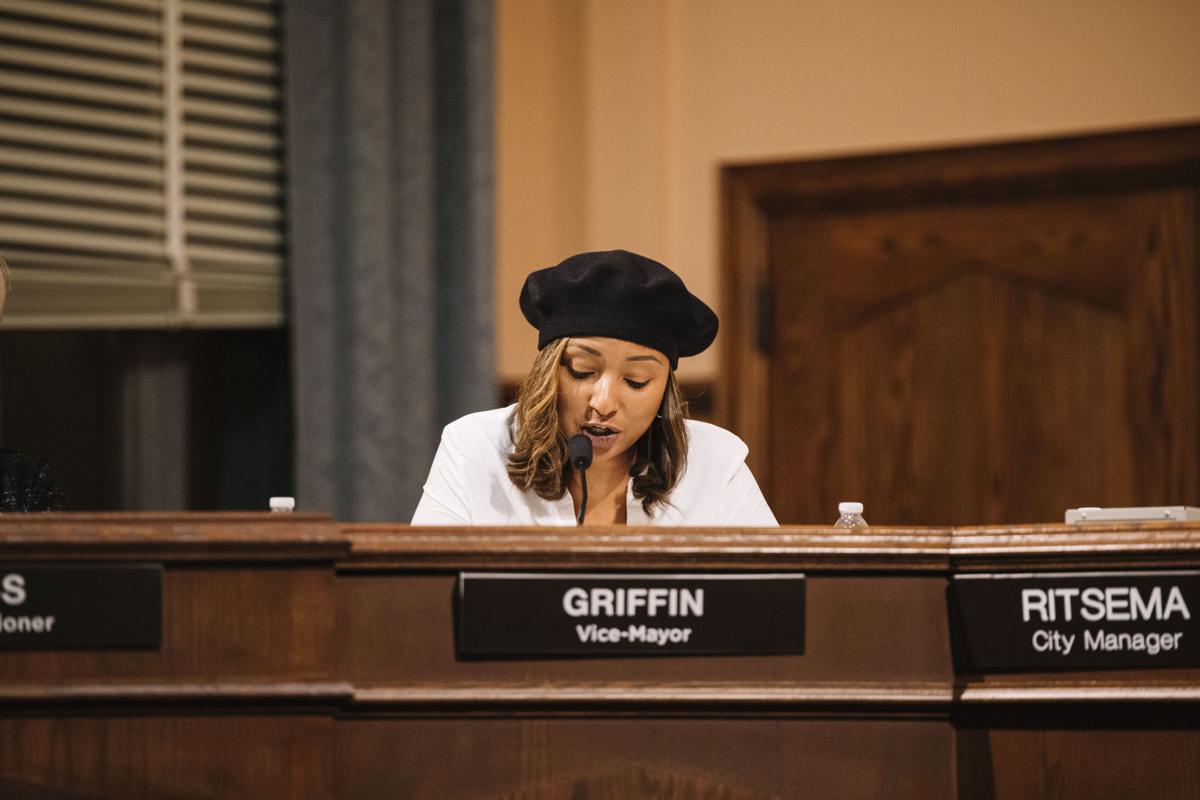 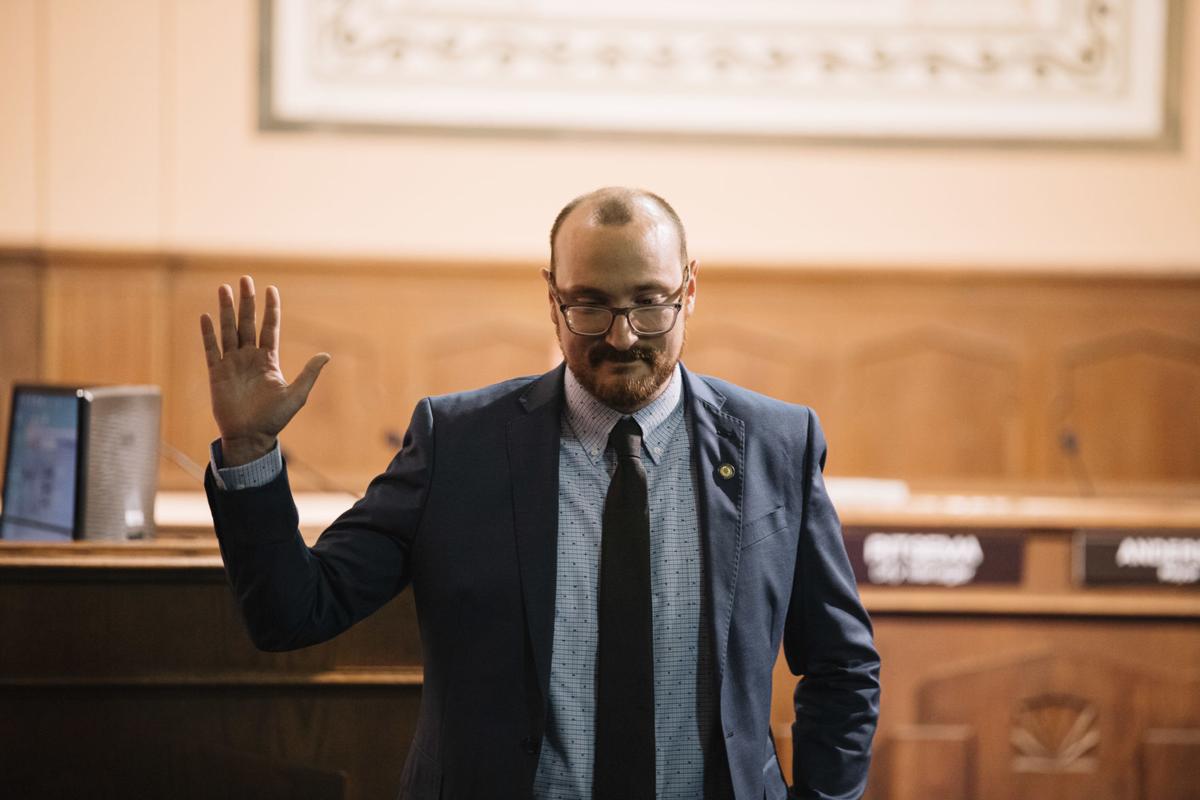 Chris Praedel was sworn in on Monday as one of Kalamazoo's city commissioners. 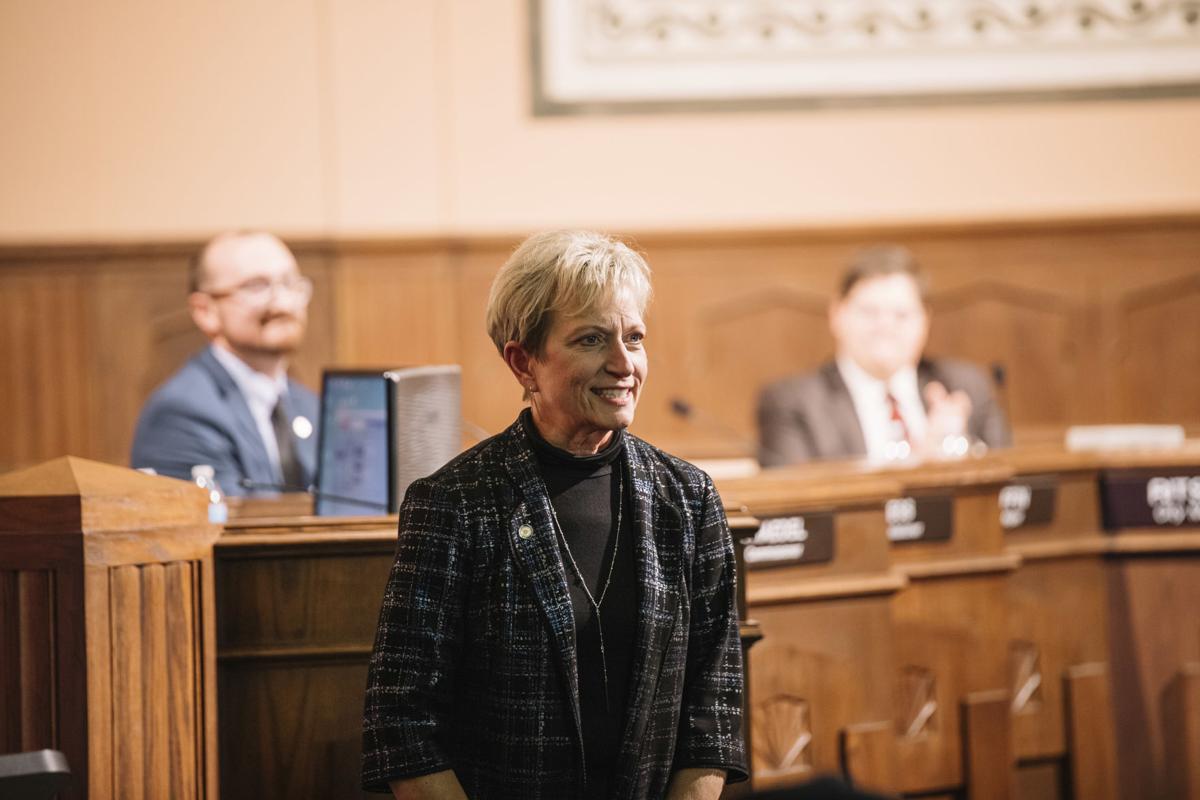 City Hall was lit red, white and blue on the night Mayor Anderson took his Oath of Office.

Chris Praedel was sworn in on Monday as one of Kalamazoo's city commissioners.

Anderson won the election on Nov. 5 receiving 59% of the votes and had previously served as a member of the city commission.

Patrese Griffin, Chris Praedel and Jeanne Hess were elected to fill three open commission seats. They joined Mayor Anderson in being sworn in at the Monday night meeting with Griffin taking the position of vice mayor.

Speaking for the first time after being sworn in, Griffin spoke on the responsibility she has taken on in representing her community in government.

“For someone who lives in this community and did not see people who looked like me in these spaces, I am honored to be the second black vice mayor, female, and I hope it doesn’t take 30 years for it to happen again,” Griffin said.

Anderson used his time for comment to call for a spirit of kindness in Kalamazoo, citing the current political climate which he said encourages people to tear each other apart rather than come together.

“It is a time right now when we seem likely to throw each other under the bus for the 5% we disagree on,” Anderson said. “When you are up here, it comes down to decisions, yes or no. I am hoping for grace. Know that some night some of us will vote in a way that you disagree with.”

Before adjourning the meeting, Anderson once again asked the people of Kalamazoo to be kind in their discourse and in their lives.

“We do this work with kindness. Kalamazoo, let’s go forth and be kind to each other,” he said.

Much of the meeting was spent honoring Bobby Hopewell, Kalamazoo’s longest serving mayor, who did not seek re-election and Don Cooney who had served on the commission for 22 years prior to retiring from office today. Several of those on the current commission spoke on Hopewell and Cooney describing the pair as “legends.”

“The word legend means the life of a saint. If Kalamazoo had saints we’d have Saint Bobby and Saint Don,” said Hess.

Hopewell and Cooney were presented with keys to the city honoring their long public service. State Rep. Jon Hoadley was present at the meeting and called Cooney the conscience of Kalamazoo.

Praedel praised Hopewell’s service, saying that he has been a longstanding source of inspiration.

“I tend to keep things that remind me of my past and something I’ve kept in a binder from my time at Western is the front page of the  Kalamazoo Gazette saying that Hopewell had won by 57 votes,” Praedel said.

Praedel then went on to discuss the importance of local government, saying that it matters more in day to day life more than any other level of government.

No other business was discussed during the Nov. 11 meeting as it was set aside for the Oath of Office ceremonies. The next business meeting is scheduled for Nov. 18.

David Anderson has been elected as the next mayor of Kalamazoo.