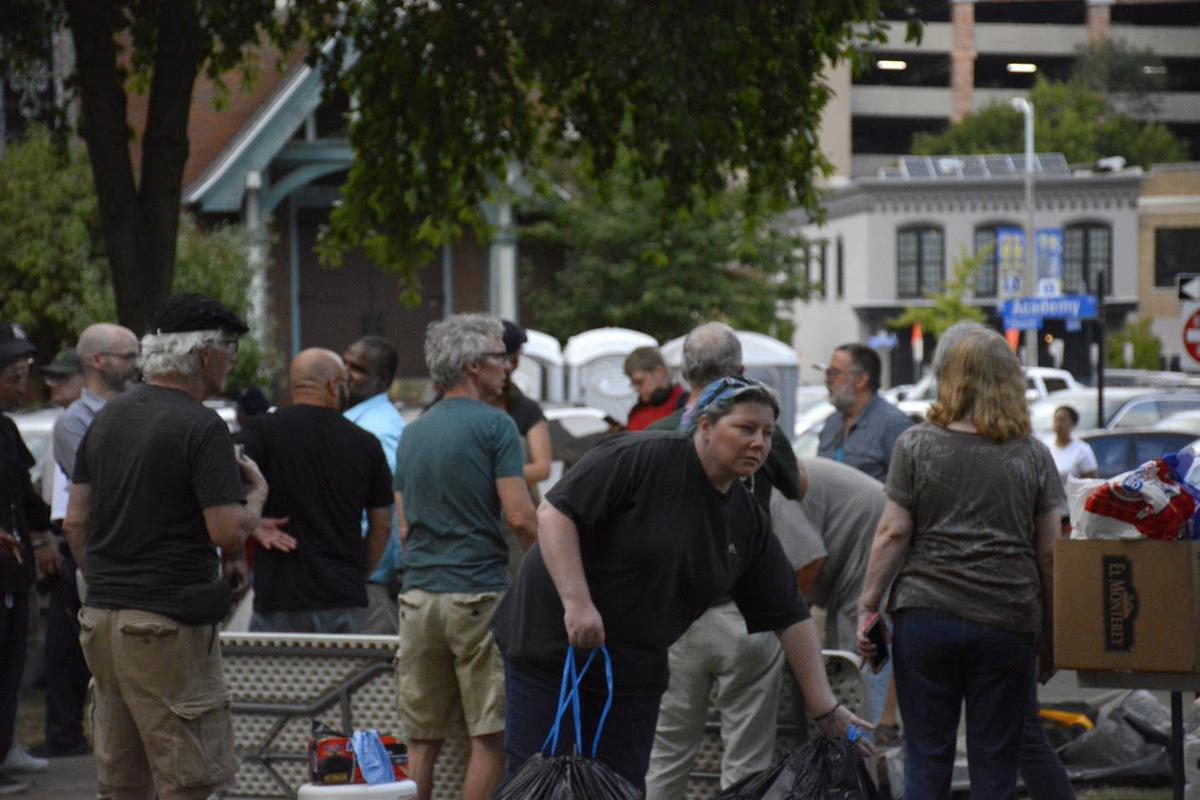 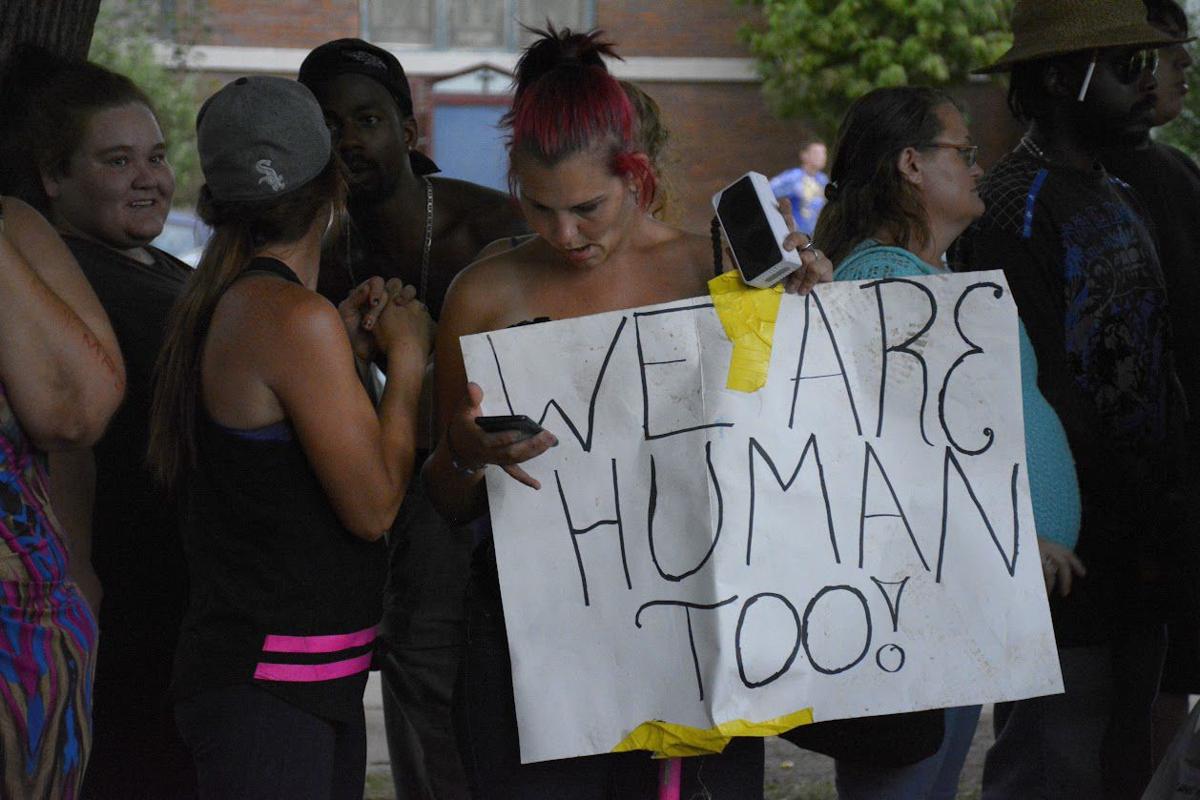 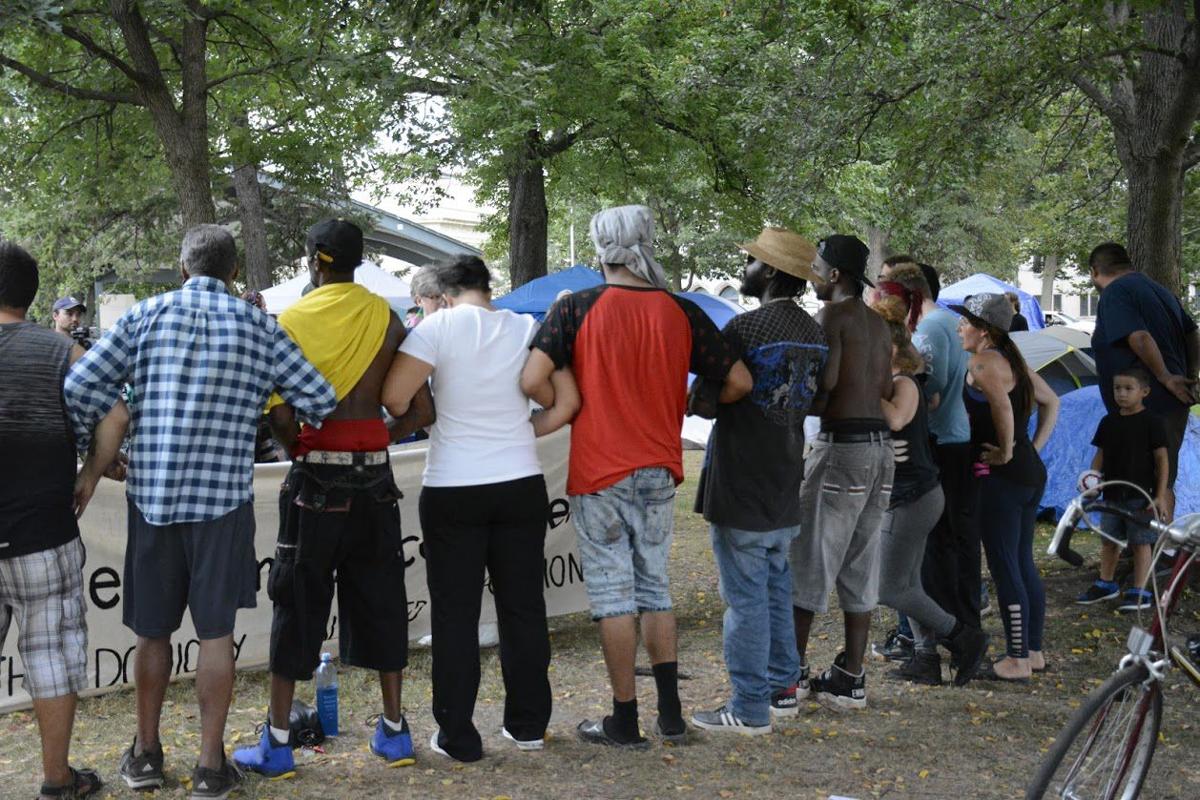 For just under a month, protesters and homeless have lived in Bronson Park in an encampment dubbed “Tent City.”

The demonstration began on Aug. 19, after the City of Kalamazoo proposed ordinance revisions that would decriminalize violations of park codes, according to the Kalamazoo Gazette.

Quickly, the protest grew into what some at the encampment called a “movement,” calling for better services and affordable housing in the city.

Earlier this month Kalamazoo City Commissioners agreed to provide protesters with a vacant building so they can organize volunteers and “work on providing mental, emotional and physical health supports to the encampment,” the Kalamazoo Gazette reported.

But on Sept. 17, the City of Kalamazoo issued a statement ordering members of the encampment out of Bronson Park.

“The growing encampment is not a solution to the issues surrounding homelessness… individuals at the encampment will be advised to gather their belongings and remove themselves by 7:00 p.m.,” the statement said. “Persons who continue to maintain tents or other indications of camping will be subject to possible arrest and prosecution.”

Kalamazoo City Commissioner Shannon Sykes, who has actively supported the encampment, said in an interview that the swift move by City Manager Jim Ritsema came as a surprise.

“We were sort of blindsided last night with the idea that we had to be out in 24 hours,” Sykes said. “These folks have been meeting with the city and the county and all the service providers to come up with the next steps forward, and they suddenly just said ‘nope, you’ve gotta be out in 24 hours.’”

In the hours before the 7 p.m. removal time, some members of the encampment began to vacate the premises, while others promised to stay. There was a large community presence as well, as church groups and volunteers donated time and food to feed the homeless.

Sharon Davis, who had been a part of the encampment for three weeks, was gathering her things.

“I’m leaving,” Davis said. “I’ve talked to some of my friends, I have an untarnished record, I've never been arrested for anything ever. I want to keep it that way. That way, in the long run I can get funds set up to where I can help the ones who do go to jail.”

Davis wasn’t interested in getting arrested to make a stand, and was headed to the east side of Kalamazoo.

“It’s kind of upsetting, because we were making a stand. Hopefully maybe we can still try and make a stand, but we have to do it in other ways,” Davis said. “We have no place to go, so we were making a point. Help us find a place to go, and we’ll get out of your park. It’s been unresolved. It’s a movement now.”

Over all, she will miss the atmosphere.

“Every family's going to have their ups and their downs. There’s been some uprisings that we’ve been able to resolve quickly, there’s been some we’ve had to remove from the encampment. Other than that, everyone’s been in a pretty good mood… we’re kind of like a family. Some of the kids call me aunt, some of my friends call me sister,” Davis said.

Others, she said, are headed to the Kalamazoo Gospel Mission, who told the Kalamazoo Gazette that they would make room for a large number of people. Riley William Sheaks stays at the Mission, and said that he’s had issues with some of the workers, but that they serve an important purpose.

“It’s not a good environment because the people that run it aren’t qualified — I could do the job better, they treat the people there like children...they don’t treat them like human beings,” Sheaks said.

In the past, employees have refused to believe he works, though Sheaks said he works two jobs and has shown employees his work clothes and schedule which shows that he works upwards of 60 hours a week.

“If you’re homeless, you’ve got a lot of time,” Sheaks said. “I sleep on a mat, I get my rest in. I have a locker that I pay five dollars a week for. It’s helpful. They are helpful in that way, but there’s also a lot wrong with it that could be fixed easily.”

But he doesn’t feel that Bronson Park is a safe option either.

“With the police, and with the unpredictability of human beings in tight quarters that you don’t know... I don’t know what a lot of people’s situations are, but I know my choices led me here (homelessness) that weren’t good choices,” Sheaks said.

Looking forward, members of the encampment seemed uncertain about the future of the movement. The encampment received an outpouring of support on Sept. 18, when community members showed up in solidarity to wait for Kalamazoo Public Safety to remove the protesters.

“We’re professors and we understand that this is a complicated social issue, and we don’t think that the city of Kalamazoo has done enough to A, understand the issue, and to B, make realistic strides toward making it better for these people, getting them a place of permanence,” Aquinas College professor Briana Asmus said of herself and her husband.

Asmus said that people with options and privilege owe it to the homeless population to help them find some place to go.

“We can’t just say get out, and not have a backup plan. The issue’s come to a head maybe today, but honestly I grew up here. I remember seeing homeless people in the park when I was a little girl. More needs to be done,” Asmus said.

Commissioner Sykes said that even if the night ends in arrest, the movement is not over.

“I think it is likely we’ll see some police presence tonight, it remains to be seen whether or not they’re actually going to follow through and arrest folks. Regardless, we’re here, were not leaving and if they want to arrest these folks, they’re going to have to arrest me first,” Sykes said.

After they are released from jail, Sykes said they will keep fighting for the homeless in Kalamazoo.

“We’ll keep on going with our meetings, but these folks, this family, this community out here — these folks are not going back into the shadows,” Sykes said.