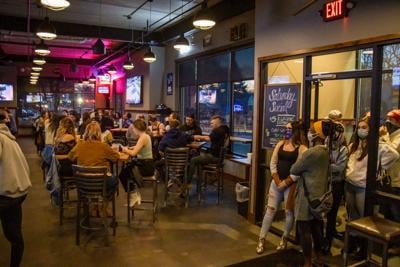 As the sun cracks through grey clouds and temperatures rise, Western Michigan University students are being drawn out of their homes to venues around town. For some, the ideal place to celebrate warmer weather is a local bar.

Jones claimed this was their first time going out to a bar in five years. In response, Eifler said there was “a lot of temptation.”

“We only think it's okay after a year of not going out,” Jones said of partying amid the pandemic. “For five years we were like maybe it's not worth it and then the pandemic hit and we were like ‘f— it, we should just go out (to a bar) if its our last time ever.’”

For Eifler, enjoying themselves despite the pandemic was a motivating factor.

“This was the first pandemic in you know however many… never,” Eifler said. “You try to adjust to it the way you can and try to at least look at it in a positive light and have a good time.”

Some students feel partying is an essential part of the college experience, especially at WMU, a university with a reputation for large parties such as the annual House Crawl. Though an official House Crawl was not planned for 2021, a plethora of students gathered in the neighborhoods surrounding WMU to celebrate St. Patrick’s Day.

“Oh yeah, definitely is,” WMU alumnus Vanessa Schaefer ‘20 said when asked whether partying was an essential aspect of the college experience. “I probably wouldn’t have gone to college if it wasn’t.”

Schaefer went to the Old Goat Tavern with Kalamazoo Valley Community College sophomore Jaylee Smith. The recent grad claimed she wouldn’t have met Smith if it wasn’t for the party scene in Kalamazoo.

“I just turned 21 in October so… it sucked it was not fun but now that bars are open and everything it's just fun to go out and do something,” Smith explained.

Though Smith was disappointed she could not celebrate at a bar on her birthday, she understood the precautions being taken.

“Everything was shut down but it was understandable why because it's a pandemic going on and everything and just trying to not spread it,” she added.

WMU’s number of confirmed COVID-19 cases has increased from three confirmed cases on Feb. 27 to 12 on March 31. An average of 120 students, faculty and staff were tested per day over the 32 day period.

WMU freshman Abigail Tompoles feels students should still be taking precautions despite the desire to get out and enjoy themselves. If she was of age, Tompoles would not be attending bars now, she explained.

“I know it's not the safest thing ever and I know a lot of people still want to go out and have a fun time,” she said. “I think safety precautions are necessary and I don’t think it's the smartest idea right now.”

Tompoles lives in the dorms and experiencing COVID-19 surrounded by other students has increased her nerves.

“It does kind of make me nervous living on campus a little bit especially seeing people without masks in my dorm,” she explained.

On March 5, the WMU community was notified of a confirmed case of the B.1.1.7 variant in a student living off-campus. Since then, the university has been operating under more stringent protocols assuming the variant has spread on-campus.

“I know it's real but it's a gamble coming out,” WMU junior Brooklyn Mcallister said. “It's not gonna stop me though.”

Mcallister went out to the Old Goat Tavern with WMU senior Jeneal Isma who bartends at Olive Garden.

“I just wanted to go and sit and see what it was like, more or like, to be on the other side of the table,” Isma explained.

She continued: “It’s definitely a gamble coming out but I feel like keeping my distance, keeping everything clean, people are coming up and they’re talking and they’re handling food around more people, they’re wearing masks.”

Per Eifler and Jones, engaging in party culture is a part of the college experience you can’t recreate and shouldn’t be missed due to the pandemic.

“It’s not your fault there was a pandemic,” Jones said. “Before we started, there was no pandemic.”

Eifler added: “You’re only young once, you’re only this age once, you only get these kinds of opportunities in this short span of time. You should definitely go out and enjoy it and meet all the people you could possibly meet and have a good time.”