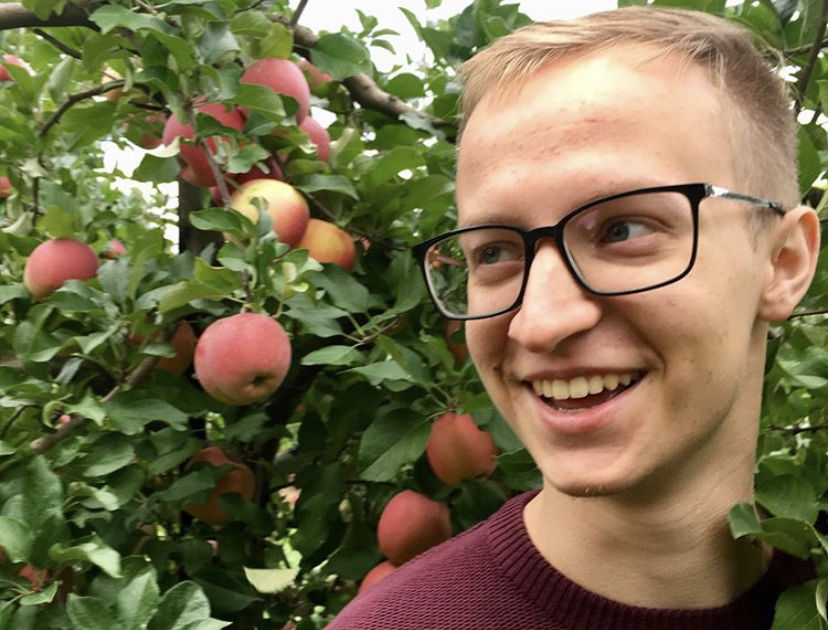 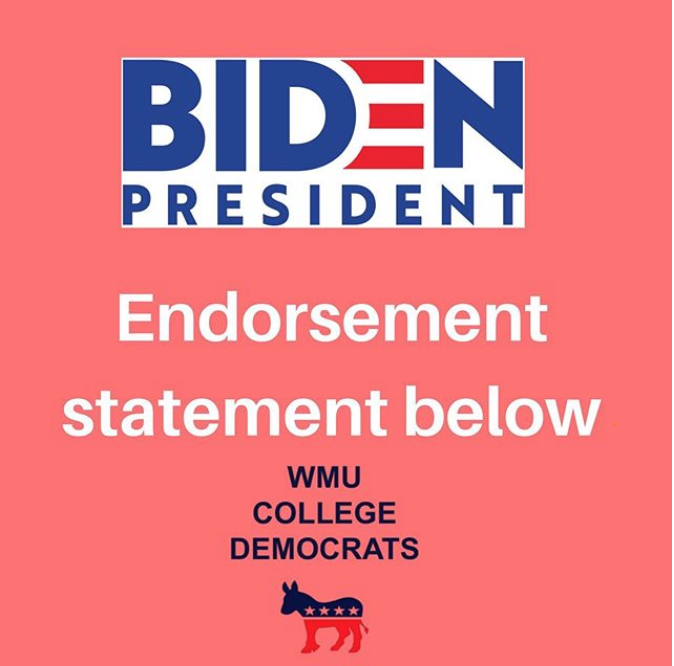 Western Michigan’s College Democrats may have officially joined the 'Joe Biden for President' camp with their latest endorsement, but their President, Cole Hamilton, isn’t particularly overjoyed about it.

Hamilton is by no means a Trump supporter—he simply doesn’t believe Biden is capable of instituting the change he thinks the United States needs. At this point, for Hamilton, the country can’t take another four years of Trump.

“I think Trump has proven to be just a huge threat to the United States and the working-class people within it,” Hamilton said. “His lack of strong leadership in regards to COVID-19 has led to, and you can see this in our endorsement, but it’s led to over 135,000 deaths and these are all on Trump’s hands. It’s because he hasn’t done what’s necessary to try to curt this pandemic.”

Hamilton indirectly referenced the measures Trump has taken to discredit science such as questioning the authority of Director of National Institute of Allergy and Infectious Diseases, Dr. Anthony Fauci, supporting those who actively disobey lockdown orders and encouraging his supporters not to wear masks.

“At this point more than ever it’s a matter of who will prevent the most deaths,” Hamilton added.

The WMU Dems President likened the current state of politics to the debate over social security. A lack of support for disabled and retired adults leaves the aforementioned without resources and at a higher likelihood of experiencing stress and hardships which could lead to death. In the case of COVID-19, a lack of contact tracing and preventative measures increases the likelihood of civilians contracting the virus and filling up hospitals. This, in turn, leads to higher death rates. In both instances, if politicians backed certain policies, fewer people would die.

Another large problem Hamilton has with Trump is the racist rhetoric Trump uses. One example being, “when the looting starts, the shooting starts,” a phrase Trump used in regards to protests over police brutality in the wake of George Floyd’s murder.

“That type of rhetoric really emboldens the far right and it also increases the racial tensions we’re currently having in this country,” Hamilton explained. “So, instead of trying to unify people and prevent people from being at each other’s throats, he’s actively encouraging people to be antagonistic towards each other based solely on their race.”

While Hamilton wasn’t speaking on behalf of the WMU Dems in this interview, his thoughts on Trump echoed the Dem’s Biden endorsement almost verbatim (you can find the statement below).

Going forward, Hamilton is fairly confident Biden will re-enter the Iran Nuclear Deal and Paris Climate Agreement, both legacies of the Obama Administration.

“(Biden) rides off of Obama’s legacy so yeah he will definitely (re-enter the Iran Nuclear Deal),” Hamilton said. “I’m sure he said he’ll re-enter into the Paris Climate Agreement or at least he’s criticized Trump on that and he’s not going to push for a border wall.”

The “air of professionalism and sense of decorum” Biden will bring back to the West Wing, according to the WMU Dems, is less of a concern for Hamilton.

“Professionalism doesn’t deliver bread and butter to people,” Hamilton said. “It looks nice and makes people feel good but it doesn’t give them what they need.”

Hamilton believes his views on professionalism reflect the thoughts of most Americans, the working class specifically.

“I think at this point most Americans are fed up with our congress which is run by people who are abnormally wealthy compared to the average American,” Hamilton explained. “They don’t care about professionalism, they just want to make good money and live good lives.”

When it comes to the requests the Dems made at the conclusion of their endorsement, Hamilton doesn’t believe Biden will accomplish any of them— except for the ones related to COVID-19.

“I think his response would be more measured than Trump’s which is not a high bar but I think any little bit counts,” Hamilton said. “Even a small difference in this policy could prevent thousands of Americans from dying.”

Overall, Hamilton believes Biden isn’t very policy-oriented: “When he campaigns, he doesn’t talk about his policies on his website. He has some policies on there but he never talks about them when he’s out in public so I don’t expect any sort of major policies from Biden.”

This lack of policy initiatives will extend to Biden’s treatment of Black people in this country after he’s elected, in Hamilton’s eyes. He sees this as symptomatic of a larger problem with moderate Democrats.

Hamilton used Biden’s response to police brutality as an example: “(Biden’s response) was ‘why don’t they just shoot them in the leg with rubber bullets,’ that really explains the mentality of Biden and of the Democratic party establishment. It’s accepting a bad situation and saying ‘oh we can make it a little better’ but not doing anything to change the complete situation.”

Hamilton was referring to comments Biden made while meeting with community leaders at Bethel AME Church in Wilmington, Delaware. Biden said: “Instead of standing there and teaching a cop, when there’s an unarmed person coming at them with a knife or something, you shoot them in the leg instead of in the heart is a very different thing. There’s a lot of different things that could change.” Biden didn’t seem to realize that the subject in his hypothetical would be armed if he was holding a knife. A shot to the leg could also still potentially be fatal.

“If anything, maybe he’d address voter suppression, but it’s for a selfish reason he’d want those votes to go to democrats,” Hamilton added.

This is the first of a two-part story on Hamilton’s thoughts about the November presidential election.

Now more than ever it is evident that the Trump presidency is a catastrophic threat to our nation. His lack of strong leadership in regards to the COVID-19 pandemic led to the death of over 125,000 Americans. On top of this, his racist rhetoric such as, “when the looting starts, the shooting starts,” only seeks to further exacerbate racial tensions and racial violence in this country.

When Biden is elected he will re-enter the Iran Nuclear Deal and Paris Climate Agreement. He will end wasteful spending on projects like a border wall. Biden will bring back an air of professionalism and a sense of decorum to the West Wing. This being said, young people need more from Biden.

Young people and WMU College Democrats need to see the following from Biden:

1. Expand testing and medical infrastructure in response to COVID-19

2. A Universal Basic Income for the duration of the COVID-19 crisis

3. Support the reallocation of police funds

5. Support Medicare for all

6. End the War on Terror

7. End the War on Drugs and mass incarceration

8. Support a wealth tax for the top one percent